Events Strategy
Save to my profile 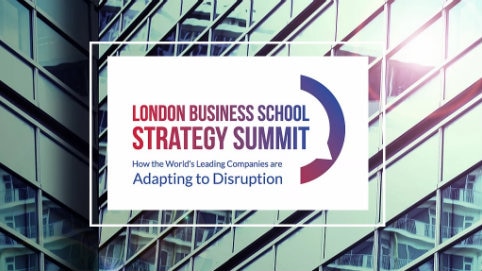 Small entrepreneurial firms have been the focus of disruption in recent years, with Uber and Airbnb held up as shining examples. But there is another side to the story: the established organisations. How should they respond to disruption?

“Your response should entail two strategies,” Costas Markides, Professor of Strategy and Entrepreneurship at London Business School told an audience at the student-led Strategy Summit. “Disruption to a business model is both a threat and an opportunity. It’s almost impossible to address both with one strategy. There are outliers that can, but I call them magicians. The rest of us can’t do it.

“You have to defend the threat to the core business with one strategy and attack the disruptive opportunity with another.”

Speaking about disruption in the watch industry, Jean-Claude Biver, the president of the Watches Division at the LVMH Group, said connected watches such as Apple’s smartwatch presented both a threat and an opportunity.

The chairman of Hublot’s board of directors and CEO of TAG Heuer and Zenith, said: “It’s a threat for the iPhone because people will eventually take calls on their watch.” He added that competitors’ connected watches were a threat to LVMH if it did nothing and the high-tech watches proved successful. “But the connected watch will eventually become obsolete. A Swiss-made watch is art. It’s eternal.”

TAGs, with a starting price point of £900, are on a par with Apple’s smartwatches, which range from £269 to £1,549. Professor Markides asked Biver about TAG’s strategic response to such disruption.

Bringing out the connected watch was just the first step, said Biver – the “protection” strategy. The second step was to “bring in other assets”, which provided the opportunity.

“We decided to fight obsoleteness. We made a modular connected watch, which allows people to change the model. If you don’t want to wear your connected watch, you take the electronic module out and change it for a mechanical module. It’s like when you buy a camera, you have different lenses: we are selling our watches with the option to buy it with one lens or another.”

TAG’s modular watch is a way to attack the opportunity the tech space is offering with something new and unique while holding onto its long-held brand of high-quality, Swiss-made luxury. It lets people buy into the smartwatch world now, without having to throw it all out and start all over again.

Having two strategies was just one answer from Professor Markides to the question, “How do established organisations react to disruption?” Altogether, he shared six takeaways: