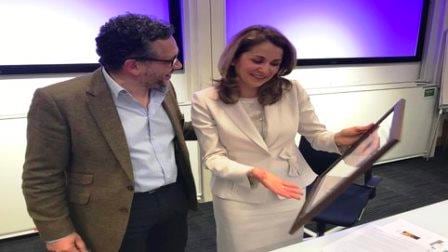 An exhibition which tells the story of an imaginary ancient wreck of a vast ship, The Unbelievable, is an unusual starting point one might think for this year’s Sumantra Ghoshal Strategy Conference on Managerially Relevant Research at London Business School.

And yet Treasures from the Wreck of the Unbelievable, Damien Hirst’s foray into staged deception on an epic scale, is the perfect mindscape for such an event according to Michael Jacobides, Sir Donald Gordon Chair of Innovation and Entrepreneurship at London Business School.

“In an age when, to quote British politician and passionate Brexiteer, Michael Gove, ‘people have had enough of experts’, a potent tableau vivant representing the tensions between desired belief and deception has never been more relevant. Part of what we need to do, as business school academics, is be both rigorous - sorting out what’s true from what’s fake - and relevant. We need to sure our views are heard beyond an insular academic minority.

"Our conference, where top faculty from all over the world came to present and hear new research, explored this theme in some detail, including our dinner debate entitled, ‘In the era of post-truths, the stories that we spin as business academics are more important than the facts that underpin our research’,” says Dr Jacobides.

A distinguished body of debating panellists and speakers, who included MIT’s Deputy Dean, top faculty from Harvard, Wharton, INSEAD, but also Harvard Business Review’s Executive Editor, the FT’s Management Editor, Andrew Hill and Mark Wilson, former Vice President of Corporate Strategy at Unilever, tackled these post-truth issues head-on. Paper presentations were interspersed with insight sessions from industry leaders, and all academic presenters were asked to “pitch” their paper in less than three minutes for a non-academic audience, in an effort to bridge cutting edge theory and practice.

The Sumantra Ghoshal Conference highlights the best managerially relevant research from around the world. The distinguished event is named after the late London Business School Professor of Strategy and International Management, one of the worlds’ leading gurus.

Shortly before he died, Professor Ghoshal wrote one of his most contentious papers, in which he suggested that much of the blame for corporate corruption in the early 2000s could be laid at the feet of business schools and the way they try to teach management as a science. Such a method has no room for morality. Thus, argued Ghoshal, “Business schools have actively freed their students from any sense of moral responsibility”.

“He was a man ahead of his time,” says Dr Jacobides. “In an era of moral ambiguity, social and political disharmony business schools now have an extra responsibility to demonstrate ethical leadership. Over the last year Western liberal democracies have been caught off guard. Deceitful behaviour, vacuous discussions and empty rhetoric has left a large space for academics teaching management and business, and the social sciences to respond to a wholly new set of challenges.”