Leadership Politics Women
Save to my profile 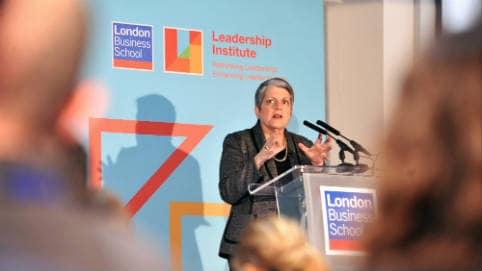 Political leaders must contend with both the physical and virtual challenges that nations’ borders present, according to Janet Napolitano, President of the University of California and former US Secretary of Homeland Security.

Napolitano said political and business leaders and policymakers needed to establish clear values that would uphold people’s democracy in an age where nations face many threats.

When speaking at a London Business School Leadership Institute and Alumni Mining Club event, Napolitano said: “In my view, the successful management of borders depends on the answer to a fundamental question: how do we stay true to the values of open, free and democratic society while also ensuring national security?

“We live in very difficult and challenging times and the ability to identify complex problems and bring to bear complex solutions are the competencies that help effective leadership, both in the political and policy realms, and the private sector.”

The event was hosted by Randall S. Peterson, Professor of Organisational Behaviour and Academic Director, Leadership Institute, London Business School, which brings academics and practitioners together to put leadership research into practice.

Napolitano urged society to make a clear distinction between security and immigration policies. She said that doing so would be “one important step to ensuring our values are preserved”.

She also discussed the world’s fight against extremism, pointing to the controversy in February 2016 when Apple’s CEO Tim Cook refused to help the FBI break into an iPhone belonging to an alleged Islamic fundamentalist.

Syed Farook and his wife, Tashfeen Malik, were accused of killing 14 people and injuring 22 in a shooting at his San Bernardino, California, workplace last December. Cook claimed that co-operating with the FBI would “threaten the security” of Apple customers.

Napolitano said: “Apple and the FBI are an effective illustration that when you’re in a leadership role, and security is in your portfolio, you have to deal with issues like these, day in day out.

“We need powerful international partnerships to counter violent extremism. Third party partnerships, the private and the non-profit sector all have a part to play.

“Security is a complicated issue that drives right to the heart of our values. There’s no denying that sometimes the balance is very difficult to strike.”

Napolitano added that schools, colleges and universities can help tackle radicalisation. “Educational institutions offer opportunities for transformation. As more people take up education, it gives me confidence that open and free societies will trump extremism.”