Opportunities as real as the challenges in Africa

Business education Commerce Emerging markets Events
Save to my profile

“It’s time for Africa, its time is now” 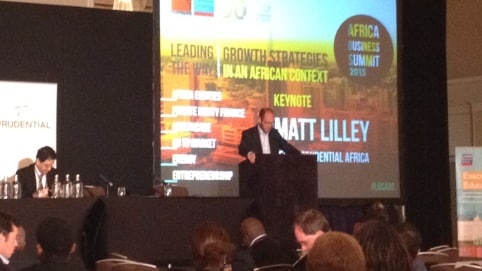 Those were the words spoken by Robbie Brozin, founder of Nando’s, the popular South African Peri-Peri chicken restaurant chain, as he closed the London Business School Africa Business Summit with his keynote speech.

His comments followed a general theme of optimism, which pervaded many of the panel discussions and speeches on healthcare, energy, entrepreneurship, markets and private equity, and finance.

Long-term commitment to dynamic African markets and flexibility in the face of short-term instabilities, political challenges and unpredictable disasters came through as powerful motifs.

“Doing business in Africa is not nearly as hard as many foreign investors think,” said keynote speaker Matt Lilley, CEO of Prudential Africa, which extended its reach to the continent a year ago following successful ventures in Asia.

“Thirty nine countries in Sub-Saharan Africa created wide reforms to make it easier to do business there last year. It’s important to look beyond negative generalisations – it’s a large, diverse continent and while it’s maybe less developed than other markets, it’s developing more quickly than any other region in the world. It’s a serious mistake to assume it will develop the same way as Asia or Europe, just several years behind. We’re already seeing incredible innovation.”

Lilley emphasised Prudential’s commitment to the continent and added: “ We think the rewards will be great. Prudential is taking a flexible, long-term approach in Africa.

“Africa’s not just important for Prudential, it’s also critical for the UK economy. It has some of the fastest-growing, most dynamic markets in the world and the UK can’t afford to take its historic links in the region for granted.

Flexibility as a key to success was a theme on a panel on entrepreneurship in Africa, where investors and entrepreneurs described various obstacles they had overcome.

But for entrepreneurship panel moderator Okendo Lewis Gayle, founder and Chair of the Harambe Entrepreneur Alliance, promoting African business is about building a realistic narrative, not just one of optimism.

Speaking after the panel discussion he said: “This is Africa, the opportunities are real as are the challenges.

“The narrative often swings between optimism and pessimism. At the moment it’s very positive, but we need to be more pragmatic and be able to focus on successes so that when the pendulum begins to swing back people are able to say, ‘Yes, but look we got M-Pesa (a hugely successful LBS mobile money transfer service startup) out of this.’

“People need to be able to admit that yes, there are problems, but there are things happening as well. After all, the US is the home of Harvard, but it’s also the land of Ferguson and Hurricane Katrina.

“The question is, how do we create a more nuanced narrative and say, ‘Be realistic and pragmatic, there are challenges, but there are also opportunities and both can co-exist.’”

But for now, Africa seems to be riding on a wave of positivity about its business future.

Jonathan Rosenthal, Africa editor at the Economist moderated the speaker events, and put the feeling of optimism down to strong governance and innovative entrepreneurialism.

“It feels very different from previous bouts of commodity driven optimism where people have just said ‘oil prices are high or crop prices are high, so parts of the continent are going to do well’,” he said.

It seems that despite instability in some of its key regions – Boko Haram’s presence in Nigeria, recent terrorist atrocities in Kenya and the immense human cost from the Ebola outbreak in West Africa – Africa’s markets remain dynamic.