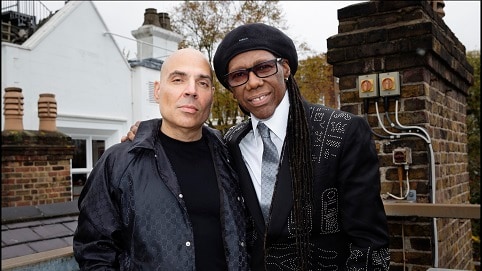 Prolific song writer, producer and performer Nile Rodgers was on campus last week to talk about his new career investing in music through a London listed fund.

Rodgers is best known as a performer with the band Chic but he has also written and produced a string of hits dating back to the 1970s. Among his most recent is Daft Punk’s smash hit Get Lucky, which he co-wrote.

Rodgers took to the stage at the Sammy Offer Centre alongside his manager Merck Mercuriadis. He has also managed Elton John, Guns N' Roses, Morrissey, Iron Maiden and Beyoncé.

As well as managing Rodgers, he runs Hipgnosis Music where Rodgers also sits on an advisory panel. Through the fund, Mercuriadis manages the rights to Rodger’s music alongside a portfolio of other hits.

Hipgnosis offers investors a pure-play exposure to songs and associated musical intellectual property rights. In July 2018, the fund raised approximately £200million with an Initial Public Offering on the Specialist Fund Segment of the London Stock Exchange.

“Nile and I have always believed music has real value to it but what people don't realise is that when a song is proven the earnings pattern to it becomes very predictable and reliable and is therefore investable,” claimed Mercuriadis at the Music Club event last week.

“These songs are as valuable as gold or oil - Nile talks about ‘pork bellies’ but I am a vegan. The idea is simple; the income streams are predictable and reliable."In particular, in a post-Donald Trump world, what investors want is something that is uncorrelated to what is going on around it. What is fabulous about music is that it is the soundtrack to celebration and, when things are challenged, music is the sound track to escape, so that you can rise up again and conquer that obstacle."

Mercuriadis said that writers and artists have traditionally been at the bottom of the food chain in the music industry and the “ulterior motive” of Hipgnosis is to ensure creative artists are paid more and build a company to change that system.Rodgers added: "If you look at a song, the value doesn’t fluctuate, it rarely goes down because it's out there working for you becoming more and more valuable. As it gets older its worth more.”

He added: “The fund is centred on songs which are most profitable but even my failures sometimes produce something. I wrote a song (with Chic colleague Bernard Edwards) called Soup for One; it was a flop but a few years later a band called Modjo wrote a song called Lady (Hear me Tonight), which sampled Soup for One, that became a multi-million dollar property and I became 50% of that.

“Can you imagine a situation where something like gold doubles in value, it happens but it’s rare. In the case of something I've created, it is much more common.”

Mercuriadis said he and Rodgers didn’t want to structure the venture along the lines of a private equity fund because it would impair the amount they could pay artists. Hipgnosis runs a buy and hold strategy that aims to pay out a regular stream of income to investors. He also hypothesises that the songs could become worth considerably more than they are now, possibly three or four times their current value.