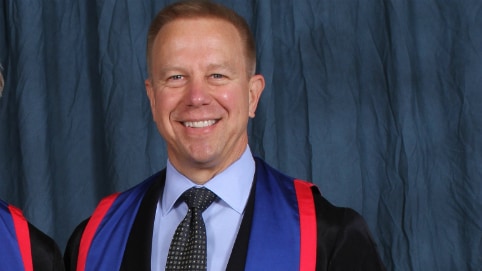 “I hope that the next step is an international effort – whether it’s to the moon or Mars,” said Col Kopra. “When you have a common mission, it gives you the opportunity to develop relationships. If we had those same relationships with our international partners outside of space, it would be powerful.”

Col Kopra was conferred with a Fellowship at this year’s Congregation on 13 July. He lived and worked on the International Space Station (ISS) for 244 days in total, completing two spaceflights and three spacewalks during that time. In May 2016, he took part in a live Q&A from the ISS.

He described the ISS as a world-class laboratory. “I look forward to seeing what sort of developments come from the hundreds of experiments that we carried out every day up there.” The innovations are incremental, he explained. “Like most scientific research it’s a building-block approach towards understanding what it takes to live and function beyond the Earth’s orbit.”

This research has implications for humans’ continuing survival on this planet, said Col Kopra. “There’s an application to energy. We need to make things more efficient, so we can save conventional energy sources while we further the development of renewable sources.”

US President Donald Trump is keen to make his mark in the universe. In his inaugural address he said the US stood ready to “unlock the mysteries of space”, and he recently signed an executive order to revive the National Space Council, saying, “We are restoring America’s proud legacy of leadership in space.”

Said Col Kopra, “Everyone involved in human space exploration is excited when our political leaders get enthused about space because it requires government backing for us to be able to go and do these things. Human space flight is not a sustainable commercial venture yet.”

The next NASA-led trip around the Moon will be an unmanned mission with the Orion capsule, which is planned to take place in 2019, Col Kopra said. “After this test flight, we’ll understand the risk profile and the areas we need to improve to put a crew on board.” The manned mission is scheduled for 2021.

Trump recently told US astronaut Peggy Whitson that he was keen to send a crewed mission to Mars sooner than that. He said, “I think we want to do it in my first term or at worst in my second term, so I think we’ll have to speed that up a little bit.”

The US President may be a little optimistic. “I hope we find a way to get there faster,” said Col Kopra. “But human space flight is difficult. On the ISS the environment we have is exactly what we create and maintain and outside that very thin hull of the space station there’s a vacuum that’s inhospitable to life. With the technology that we’ve developed to date it would take six months to get to Mars. It’s a long way and time is risk – there are more opportunities for things to break, more exposure to radiation for the crew.

“At NASA we’ve learned through very hard lessons what happens if you don’t get it perfectly right. We had [space shuttle disasters] Challenger in 1986 and Columbia in 2003. Going through that is a very painful visceral experience. It’s important we get things as right as possible and mitigate risks where we can.”

Col Kopra completed an EMBA-Global from LBS and Columbia Business School in 2013. “I came to LBS wanting to understand what opportunities were available outside my experience base and to learn new skills,” he said. “But more importantly, I came to recognise the good that can come out of commerce. Both space and commerce require organisations and governments to focus on a common goal.”

The astronaut is now a partner at Blue Bear Capital, a venture capital firm focused on innovative technologies that improve the energy supply chain. His EMBA-Global classmate Ernst Sack is also a partner at the firm.