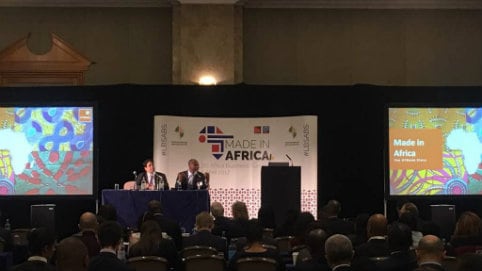 Africa – a continent combining 54 countries – accounts for 16% of the world’s population but just 3% of its trade. Jonathan Rosenthal, The Economist’s Africa editor and ABS moderator, claimed this “trade deficit” was the continent’s greatest challenge.

While exports from Africa to the rest of the world offer significant potential for economic growth, another untapped market can be found much closer to home, said Segun Agbaje, CEO and managing director of Guaranty Trust Bank: trade between African countries.

“I'm not so sure that Africa has to sell to the rest of the world. The population of Africa is substantial; focusing efforts there will help reduce the trade deficit.

“Africa should produce for Africans and worry about the rest of the world later.”

Other global regions experience much higher levels of internal trade. For instance, in 2014, trade within Africa was just 18% according to a World Trade Organisation report, compared to 69% of Europe’s trade within the EU.

African countries also need more support in becoming self-sustainable, said many of the ABS speakers. For example, despite Nigeria being sub-Saharan Africa’s largest grower of tomatoes, it’s also the biggest importer of tomato paste worldwide. But Agbaje warned: “You can't turn a country that imports into one that’s self-sufficient overnight.”

Commodity prices in the region have taken a plunge – particularly oil, which fell 67% from June 2014 to December 2015. “Oil prices coming down has been a blessing for the country. It has forced it to look inwards for new opportunities,” said Agbaje.

Isabel dos Santos, the chairwoman for Sonangol, Angola's state oil firm, agreed. “The oil sector was so dominant in countries like Angola and Nigeria that it took much of our attention.

“Now the oil sector is less influential and there are more opportunities for the private sector and for entrepreneurs able to produce new things.”

The Angolan businesswoman and entrepreneur said that a rising middle-class population offered unexplored potential. “More middle-class people are increasing demand for agricultural products as they consume more. But at the moment, many African countries are still importing consumer goods.”

Dos Santos reported that gaps in the supply chain made producing goods tough, for example would-be chicken farmers without access to corn. “There are still missing links. But these are just opportunities: if you need corn, why not grow it?”

Jay Ireland, President and CEO at GE Africa, pointed to three major barriers to growth in the continent: power, logistics and skills. “To invest in Africa as a manufacturer, you need a secure power source.” Africa experiences frequent power outages. “You need to get products to your customers when you say you will. And you need skilled people able to do the work.”

It will take a blend of government policy, business strategy and smart people, he said, to address the barriers and boost long-term economic growth.