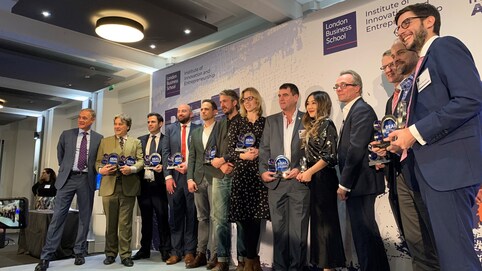 The annual Real Innovation Awards showcase the qualities of tenacity, originality, good timing and happy coincidence – the real ingredients of innovation. The shortlisted entrepreneurs at last night’s awards dinner was no exception.

Rarely does innovation keep to a plan but it evolves at its own pace guided and fed by entrepreneurs who understand its true value. These awards champion these often unsung heroes of business creativity.

“We had an incredible range on the shortlist this year and it has been an enormous privilege to get to know all of these exciting companies and individuals,” said Jeff Skinner, Secretary to Judging Committee and Executive Director of the Institute of Innovation and Entrepreneurship. “This has been a fascinating year to judge and we congratulate all our winners.”

“These winners remind us that the process of innovation never runs smoothly,” said Julian Birkinshaw, Professor and Academic Director of the Institute of Innovation and Entrepreneurship. “Successful innovators have to buck the conventional wisdom, they have to overcome adversity and they have to get their timing right. That is what makes their stories so compelling.”

Winners across six unique categories were celebrated last night. With two awards in each category, chosen by either an expert panel or a public ballot, 12 accolades were up for grabs.

The judges selected Scrub Daddy for the Alexander Fleming Serendipity Award. This award is for a person or organisation that built a thriving business on an idea that originated in the most unexpected or surprising way. Scrub Daddy is built on a polymer foam sponge that goes soft in warm and hard in cold water but doesn’t scratch dishes. The invention sat in a garden shed (after inventor Aaron Krause sold his auto-detailing business) before it blossomed into the household phenomenon it is today.

Christian Mouysset, founder of Tenzo, collected the most public votes in the same category. Tenzo compiles and analyses big cloud data for restaurants. Mouysset spotted an opening while running his own hummus restaurant.

In an instance of the people agreeing with the expert choice, Hugo Spowers of Riversimple collected both the judges’ and people’s choice accolades in the George Bernard Shaw Unreasonable Person Award. A former formula three driver and engineer, Spowers is developing a mass production hydrogen fuel cell car in a factory in Wales. This award is for an individual who has shown enormous tenacity and stubbornness in pursuing an idea, despite the difficulties encountered along the way.

The judges’ choice for the Best Beats First Award went to accountancy service Xero. This award is for the company that moved quickly to dominate an emerging market category, typically with a different and better business model than the first mover. Online estate agent Purplebricks collected the people’s choice award.

The Harnessing the Winds of Change Award is for those who spot what’s just around the corner soon enough to take advantage of it. Zipline, scooped the judges choice, for its healthcare delivery drones, while Wechatpay, the mobile payment service, won the peoples' vote.

The If At First You Don’t Succeed Award celebrates an individual or organisation who tried something that didn’t work out – but which provided the stepping-stone for a subsequently successful outcome. The judges chose Fabien Mendez of Loggi a Brazil based motorcycle logistics company. The public vote went to Peter Janes, ShieldPay a peer-to-peer payment solution.

For The Masters of Reinvention Award, the judges chose Estonia’s e-Government Transformation, which has seen the small Baltic nation’s administrators ditch paper almost completely. The people's winner was Memrise, a foreign language service that is rewriting how people learn a foreign language using techniques employed on the memory competition circuit.

View photos of the event