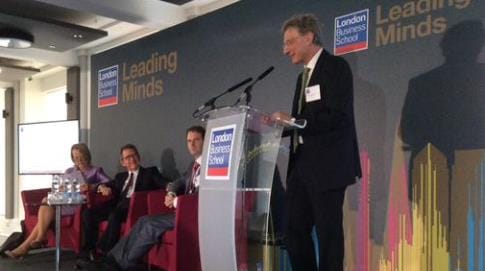 Corporate social responsibility (CSR) often acts as a sticking plaster for companies attempting to engage with society; but engaging with society should be part of their philosophy, culture and business model.

This was the scene set by Lord Browne, the former chief executive officer of BP, and Robin Nuttall, Partner at McKinsey & Company at London Business School’s (LBS) Leading Minds event, which involved more than 80 policymakers, practitioners and academics. The session was based upon the recent book Connect by Lord Browne with Robin Nuttall and tech entrepreneur, Tommy Stadlen.

CSR has failed both companies and society because initiatives are almost always detached from organisations’ core commercial activities, according to the experts.

The discussions centred on answering a key question: how can companies connect with society? The answer from the room was “with radical engagement”.

Lynda Gratton, Professor of Management Practice in Organisational Behaviour, London Business School, was joined by Ioannis Ioannou, Assistant Professor of Strategy and Entrepreneurship and Alex Edmans, Professor of Finance, in the debate.

Professor Gratton, who chaired the event, called the discussion “timely” in the wake of the Volkswagen emissions scandal.

Lord Browne took VW as an example to explain the “reservoir of trust”, saying that “reputations are made and lost based on companies’ connections” with society. “When the majority of people are against a company, things don’t go well,” he said.

“Companies build up a reservoir of goodwill which takes to fill up, but can be quick to empty.”

Nuttall explained the “30-30-30” concept, taken from research by McKinsey & Company for Connect. While the related value at stake is approximately 30 per cent of corporate earnings, CEOs spend 30 per cent of their time on societal issues, yet less than 30 per cent of them engage successfully in CSR initiatives.

“The purpose of serving society was broken within VW,” Lord Browne said. “It broke its bond with society and lo and behold, rather magically, in the first three days after the scandal shares plunged by 30 per cent.”

How to take responsibility

Nuttall proposed four ways to bridge the divide between big business and society, which are set out in the book.

2. “Define your contribution.” Organisations should clarify their enduring value, proposition and ensure any societal contributions are at the nucleus of their business purpose.

3. “Apply world-class management.” Nuttall urged executives to gain experience and learn the skills to effectively connect with society. “LBS is at the forefront and is well ahead in this school of thinking,” he said.

4. “Radical engagement.” The companies that succeed in engaging externally do better in the long-run.

How else can executives wire connection to society into their businesses? As well as following the four “tenets”, LBS experts urged executives to heed their advice.

• Professor Gratton called for leaders to make time for social responsibility rather than view CSR as an add-on. “It’s not a discussion for half an hour in the boardroom,” she said.

• Professor Edmans argued: “Shifting focus from short-term profit to long-term investment is critical for developing the intangible assets that are key to the success of the firm.”

• Dr Ioannou added that in order to connect, executives needed to “show transparency and accountability”, adopt a long-term view and “move away from purely financial incentives”.

Both LBS experts and practitioners said executives should spend more time on their most important asset: people. They added that focusing on people made sense, as they are the foundation for any society.