Inside the Nokia Booster Programme

How do you engage with people throughout the world and do so in fast and compelling ways? Nokia’s “Booster Programme” provides valuable lessons and inspiration. Lynda Gratton and Joel Casse report on the groundbreaking programme that merged online communities with strategic development and implementation. 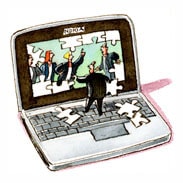 How do you engage with people throughout the world and do so in fast and compelling ways?  Nokia’s “Booster Programme” provides valuable lessons and inspiration. Lynda Gratton and Joel Casse report on the groundbreaking programme that merged online communities with strategic development and implementation.

In January 2004, Nokia, the largest mobile phone maker in the world, announced and then implemented what, for most companies, would represent a fundamental organisational change. In order to focus more closely on changing customer aspirations, its nine business units were restructured into four. At the same time, in order to ensure speed of innovation and production across the globe, all customer and market operations, product development operations, and manufacturing, logistics and support activities, were reorganised into three horizontal business units.

This daunting organisational change was made fully effective within one week and involved about 100 people assuming new jobs. For the rest of Nokia’s employees, there was no need to change jobs; the modular teams of which they were members were simply reconfigured. The discipline, philosophy and mindset of reconfiguration through standardisation and shared platforms ensured that Nokia is able to skilfully and rapidly reconfigure its human resources to meet changing customer needs.

Six years later and the senior team at Nokia remains as committed as ever to deep employee involvement in strategy and implementation via a modular, project-based structure. What has changed is the development of technological platforms capable of bringing together thousands of people from across the world with speed and ease. The capacity of social networks to create engagement and innovation is seen to be crucial to the long-term success of Nokia.

The ideas of involvement and constant strategising were put to the test in early 2009 when, in the face of one of the worst recessions the industry had experienced, the decision was taken to actively engage employees in a major business transformation. The focus was on Nokia’s Markets business, a newly formed enterprise tasked with consumer retention and the creation of consumer solutions. As in the past, the emphasis was on building a more adaptive, flexible organisation and using all the talents of the employees in the Markets business. Enter the “Booster Programme”.

The genesis of the Booster Programme, launched in late 2008, could be traced to the wide involvement of the strategy-planning process and to the flexibility and project orientation of the modular structure. It began with a design team comprised of Maximilian Kammerer, Ian Gee and the two of us designing a process that would meet three aims. First, we wanted to boost every employee’s basic awareness and skills by expanding the capacity of regional teams to work effectively across functions. Second, we needed to boost the capacity to acquire and use external resources to meet performance goals. And, finally, we wanted to enable the whole business to transform from a line-based organisation to one in which competencies would be pooled through a project or programmatic structure. The programme was ambitious. It had to cover all 5,000 employees of the business unit, encourage cross-functional and cross-hierarchical working and be capable of being rolled out across the world in the space of three months — and with a relatively low budget.

What was clear to the design team was that the traditional form of initiating top-down change would be too slow and would ignore the capacity of emerging technologies to allow employees to be part of the solution. The social-network technologies rapidly emerging on the back of Enterprise 2.0 tools created the environment for Nokia’s long term commitment to employee involvement to play out in a faster manner.

However, the team decided on a blended solution with two main streams of activities: a two-day face-to-face workshop with team leaders followed by the much broader involvement of the whole community through an online social network community. The two-day workshops were staged in locations across the world, including Beijing, White Plains (New York), Helsinki, London and Dubai. About 100 potential change leaders were part of each workshop.

When all workshops were completed, the 700 participants then returned to their teams to engage them in the ongoing process. It was at this point that the online community came to the fore. Working with specialist partners, the design team created an intranet site accessible to workshop participants and all employees of the Markets business. The online community was designed to host conversations and communications with senior managers as well as to provide information and ideas from content experts and community members.

This combination of traditional communications techniques (face-to-face workshops with team leaders) and new forms of interaction (an online community) created a groundswell of enthusiasm. All 5,000 members of the business participated in the new structure and business practices. It was clear that the Booster online community went way beyond polished corporate communication. Moreover, it created an open dialogue between community members, frontline employees and senior managers about real challenges, concrete ideas and required support. Of course, such an online community was able to rapidly reach the 5,000 employees in a consistent and boundaryless way across functions, units, hierarchies and geographies. It was clear that the programme had made a real difference – an employee pulse survey conducted across the business showed that across all 18 items those who had participated in Booster were clearer about their objectives, more likely to work in the new project based mode, more satisfied with Nokia as a place to work and had higher feelings of personal achievement.

Looking back on the year, we found that building the online community had four distinct benefits. Nokia could now:

With one single-access point, 5,000 employees representing all functions, hierarchies, units and geographies could converse with each other on important issues, share ideas and knowledge and ask questions of each other. All 5,000 employees in the group received the same information at the same time, whatever their level, role or location. The online community effectively did away with the typical top-down communication approach — which, given the pace of today’s marketplace, would certainly have been too slow.

Too often in traditional forms of engagement and communication, employees are simply passive listeners. We found that with careful support and maintenance, the online community created real opportunities for employees in the business to be active and to make the company’s agenda their agenda. We found that many people elected to steer discussions that interested them, post content they thought others would find useful, create groups of like-minded people around specific topics or raise igniting questions or issues. At the same time, others reacted to the ideas in the community or even remained silent users, preferring mainly to read and take in information. The online community also ignited a host of unintended actions. For example, one team in Germany took the initiative to invite 100 colleagues to an empty hangar, where they shared material from the Booster community and facilitated a Q&A session.

The senior team at Nokia has always espoused cooperation as a means to tap into the wealth of knowledge and experience of employees. That, really, is what open innovation is all about. What’s changed in the last five years is the way that community-based technologies can facilitate and speed this process. The Booster online community enabled senior managers and content experts to frame the initial comments and set the tone. It was then possible for the community of employees to decide how best to implement these ideas. Indeed, we found that employee discussion threads quickly moved from commenting on the strategic direction to more practical ideas on how to make operational changes. After six months, there were over 3,000 discussion threads posted. Many discussion threads were in the form of questions or described the context under which employees saw the changes as possible or difficult to achieve. These discussion threads reduced repetition and meant that the conversation always moved forward across boundaries.

Engage people in a journey, not an event

Too often, many believe that change is an independent event with its effects devolving from initial shock waves to mere ripples and, finally, to dead calm. We discovered that, although the two-day events were important, the online community that followed them ensured that the journey became more important than the event. The Booster community provided the journey, the road map, the compass and tools that allowed each team leader to embark on their own journey and to open it to many more.

The design team did much to support the community by posting messages, articles or presentations from content experts, two-minute videos from senior managers, or quizzes and assignments such as mystery shopping. By doing so, the design team was able to keep energy levels high and engagement at maximum.

Inspired by the Booster Programme, Lynda’s current research on the “Future of Work” uses an online community to unite over 200 executives from 20 companies worldwide (including Nokia). Follow her progress on www.lyndagrattonfutureofwork.com

Joel Casse (joel.casse@nokia.com) is responsible for Management Leadership Development and Change in Markets and is one of the architects of the Booster Programme.