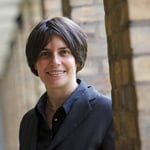 A London Business School academic has been awarded a prize for her pioneering contribution to the field of economics. The award, which will be bestowed every other year, honours a European-based female economist who has made a significant contribution to the Economics profession. There is no restriction on age or speciality.

The first ever Birgit Grodal Award will be presented to the School's Hélène Rey by the Council of the European Economic Association. She is due to receive the award in August during the Association's annual congress in Spain.

The award recognises Hélène Rey's ground-breaking contributions to international finance over her career. In a seminal contribution, she demonstrated that looking at a country’s asset positions helps predict current-account adjustments and exchange rate movements and applied this insight to the case of the United States.

Another key research line stressed the importance of transaction costs in trade in goods and assets and their impact on the economy. Applications of this coherent body of research include the slow adjustment of exchange rates toward purchasing power parity, the home bias puzzle in international portfolio allocation, and the possibility of sudden stops in trade and capital flows. Finally Hélène Rey has been much involved in the public policy debate, most recently through her analysis of the international monetary system.

The award is in memory of Birgit Grodal, Professor at the University of Copenhagen, the only woman to be elected as President of the European Economic Association.