Is globalisation on the ropes?

An panel of experts discuss why globalisation is in peril 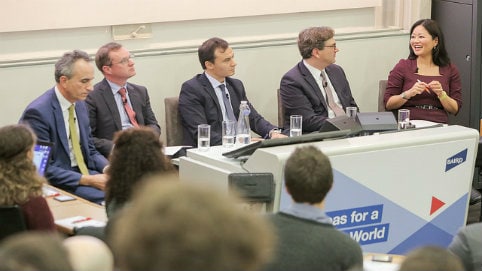 The UK’s decision to leave the European Union and Donald Trump’s election in the US, based on promises to slow the movement of goods and people, has put the spotlight on globalisation.

Should all nations work towards free trade and remove barriers to the movement of people and capital?

At ‘Globalisation – Is the consensus breaking down?’ a debate organised by London Business School (LBS) and chaired by Linda Yueh, LBS Adjunct Professor of Economics, a panel of experts attempted to answer the question.

Panellist Jason Furman, Professor of the Practice of Economic Policy, Harvard Kennedy School, believed there has never been a consensus on globalisation.

Instead he describes a “baseline distrust” driven by an increasing mistrust of elites and brought to a head by the impact of the financial crisis.“If you had to say there was a consensus, the consensus is probably that globalisation means more ‘foreigners are stealing jobs’,” said Furman, who was chief economist to former US President Barack Obama.

For Lucian Cernat, Chief Trade Economist, European Commission, the issue is a battle between a popular perception of unfairness in globalisation, sparking anger over issues like low pay.

“Among economists you would have a consensus. But then across society at large, you'd have a huge divergence.

“We have had this dilemma and this kind of cleavage in society for a long time, so why is the consensus on globalisation now a more acute question?”

For Cernat, Trump has been elected at a time when a group of international institutions have lost “a little bit of their relevance and their legitimacy” and haven’t adapted to huge shifts in the flows and share of world trade.

“I think it's a critical moment for us to reassess the way we bridge the gap on globalisation for the next 10 to 20 years and the way we've managed globalisation through a number of rules and institutions,” he said.

Ian Stewart, Partner and Chief Economist, Deloitte, said: “When you have an almighty recession, I think you then expose some of the stresses in the system… it's the collision of the financial crisis with some of the stresses that have emerged around incomes and inequality, which have triggered the debate.”

Together, with the rebuilding of international institutions, understanding and communicating the benefits of globalisation with those who feel left behind is crucial, the panel concluded.