Economics Events Finance Politics
Save to my profile

At the end of January, Julian Birkinshaw was one of the London Business School representatives at the World Economic Forum’s annual general meeting in Davos. But what did he make of the celebrated gathering? He shares his thoughts with London Views. 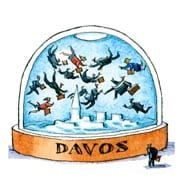 With 25,000 of the great and the good of the world’s political and business elite concentrated in a small ski resort, the World Economic Forum’s annual meeting is one of the most condensed  and high level conferences in the world.   But does it really set the agenda and what do attendees actually do?

Like every first time attendee, I came laden with my own expectations and questions.  Reality exceeded my expectations in many areas.

First, as a networking event Davos is unparalleled.  Davos, as a location, seems uniquely ill-suited in many ways – small, difficult to get to, covered in snow, etc -- but that is also its charm.  The place is so small and cramped that you have no choice but to network with your fellow attendees.  The 2002 conference, held in New York, was reportedly in contrast a soulless affair, because there were too many distractions.

For once senior corporate executives from the world’s great corporations have the time to talk.  The event’s informal atmosphere is highly conducive to one-on-one conversations.  People like Sir Tim Berners-Lee and top CEOs are genuinely readily accessible.  This is as refreshing as it is eye-opening.

Second, there are a lot of interesting events and discussions.  Often these do not happen in the main auditoriums.  Quite naturally, the bigger the events the less likely people are to stray off their usual scripts.  The presence of a constant media throng means leaders still have to be careful what they say. The words are carefully chosen, no-one departs from the script, tricky questions are pushed aside.

At the big public shows, with the A-list CEOs and national heads of state, the names of those participating are undoubtedly impressive.  One typical session featured Harvard’s Michael Porter, the British politician David Cameron, European Central Banker Jean Claude Trichet, and five other luminaries. These are the events that get reported in the world press. Only a few of the participants really make any impression.  Larry Summers was typically trenchant in his views.  Queen Rania of Jordan drew a spontaneous round of applause when she spoke passionately about the role education can play in transforming the Middle East.

The smaller events were often highly stimulating, featuring people with genuinely interesting and powerful experiences and things to say even if they are perceived as being on the margins.

The fringe is the thing.  These are the sessions run by universities and business schools, and the interactive discussions on such fascinating themes as “Does an algorithm run your life?” and “Redefining the global commons”.  These sessions are led by corporate experts, university professors, and consultants rather than superstar politicians or other leaders. These sessions are where cutting edge ideas get explored, where people aren’t afraid to take a position, and where real debate occurs.  The algorithm session, for example, featured Sir Tim Berners-Lee and Professor Jonathan Zittrain of Harvard Law School.  Zittrain really opened my eyes to some of the weird, wonderful and scary ways that the Web aggregates human effort.

Third, Davos does not actually invent the agenda but, often in private meetings, it does consolidate the agenda and a consensus view emerges whether it is on the state of the world’s economies, the future of China, or what next for the financial services industry.  In short, for all the media hoopla and geographical confines, Davos works.