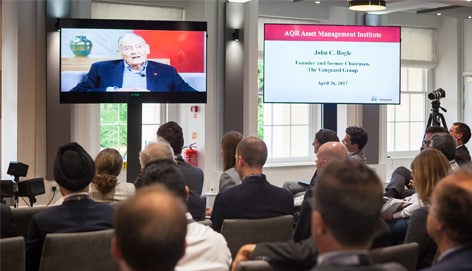 One of the asset management industry’s greatest minds, John Bogle of Vanguard, creator of the first index mutual fund, challenged the idea that the swing towards index funds over active funds was unsustainable. He suggested that growth in indexing would likely slow in coming years but there was no reason to suppose that investors would revert to active management over passive. He was speaking at an event hosted by London Business School’s AQR Asset Management Institute (AQRAMI) looking at ‘Systemic Risk in Asset Management’.

With three providers dominating index funds - Vanguard, State Street and BlackRock, so much concentration in so few institutions begs the question of whether they present a systemic risk. Bogle talked about the resilience of Traditional Index Funds (TIFs) throughout the market downturn in terms of fund flows. Between October 2007 and April 2009 the fluctuations in net cash flow within Traditional Index Funds (TIFs) were minimal when compared to Exchange Traded Funds (ETFs). Given that ETFs have only risen to prominence more recently, he was concerned that ETFs have never been seriously stress tested in the marketplace.

Ananth Madhavan, Global Head of Research for ETF and Index Investing at BlackRock, by contrast argued that there remains an important role for active investing alongside passive in meeting investor needs. He also suggested that ETFs have weathered many turbulent markets. In each case the relatively higher liquidity provided by the ETFs has acted as a buffer to the turbulence of the underlying assets.