Can 'Black Friday' stay the course?

Retail
Save to my profile

As retailers catch their breath after the UK’s true ‘Black Friday’ explosion, we look at how this most American of phenomena may one day threaten the value of our high street. 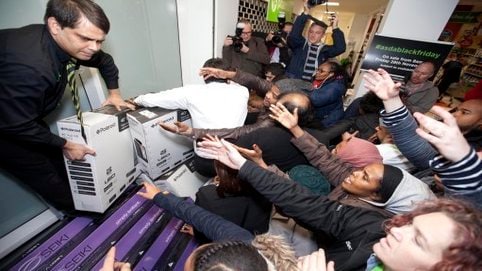 In the United States, the Friday following Thanksgiving has long produced the busiest - and most tumultuous - shopping day of the year.

Spending surges as prices plunge to notoriously low levels, loosely marking the point at which major retailers ‘go into the black’ and start to turn a profit for the year.

But now in the UK it seems the days of watching on in disbelief at shop stampedes are over; 2014 was the year we decided to dive in head first.

And with at least six million Britons expected to spend a further £650m online during ‘Cyber Monday’ (1 December), the record books could be immediately rewritten.

But amid the buoyancy of what is widely expected to become our busiest shopping weekend of all time, a London Business School retail expert is wondering where next for our most recognisable brands?

Elizabetta Camilleri graduated with an MBA from the School in 2000, and through its Incubator Programme founded SalesGossip - a daily style destination for more than 700,000 UK shoppers - of which she is CEO.

This year she saw this figure increase by 80%, marking SalesGossip’s biggest day to date in terms of both traffic and sales.

“It’s always great to have a bargain,” Elizabetta says. “We know retailers are struggling at the moment, especially those on the high street - but are we destroying even more value, by pulling prices down at time which is peak for shopping anyway?

“While this year has been largely positive for most retailers, the trick now is to continue leveraging the momentum.”

Indeed, despite the phenomenal figures seen this time round, the idea that embracing Black Friday makes long-term commercial sense for the UK is still one very much in contention.

Not only is there a fear such discounts effectively pull forward Christmas product sales - which groups would have otherwise made at full price - retail experts like Elizabetta worry it can also stifle Autumn sales; lead to subdued figures in the following weeks; and leave customers expecting even more from pre-Christmas promotions.

“We (SalesGossip) make our money from these promotions… but it’s reached saturation. Retailers are killing each other and themselves. They’ve created an environment where they tell financial analysts they’re going to sell more and more products full price. But they behave in such a way that no one is motivated to buy full price.”

Elizabetta notes how several brands - including the likes of luxury department stores Harvey Nichols, Selfridges and Liberty - all promoted discounts of sorts over the weekend, without directly linking to Black Friday. This she believes could be a key strategy for the future.

“A smarter way is to use these promotions as a hook, to encourage further full price sales. But by offering 20-30% off everything, we are surely destroying value,” she says.

Visa Europe confirmed online transactions alone topped £600million on Friday - up 22% on 2013 - with at least a further £500 million online spend predicted on Monday.

And despite reports of disorder in certain major supermarket outlets in parts of the country, Elizabetta notes how online has actually been the biggest benefactor this year. In fact several major retailers, including Topshop and River Island saw their websites crash due to unprecedented volumes.

“For the majority of people, shopping is still a hobby,” Elizabetta explains.

“But consumers have become savvy; they are researching and biding their time. In the last two days (leading to Black Friday) we’ve seen uplift in traffic of 150%.

“I think the fact that we are all in the office (as opposed to the Americans who have the day off) means that most of the interest is online.

“Conversions for tablet are way higher than with desktop, laptop and phone. For SalesGossip shoppers, conversion on tablets is 84% higher than mobile, and 24% higher than desktop.”

Backlash on the cards

With saturation point arguably already met, and the long-term sustainability of many stores surely being put in jeopardy - what of the future of Black Friday?

“I predict a backlash,” says Elizabetta.

“I don’t think it’s sustainable. I don’t you’ll see these results over and over again. It’s going to go in a cycle. There are those which are struggling, they keep undercutting everyone on prices, in the end they will not survive, or will not survive in this state they are - something will have to change.”

Added to SalesGossip data which reveals that in the next four years, 60% of high street leases will run out, Elizabetta predicts a time in the near future where national chains will eventually have to start to re-evaluate
“We haven’t yet worked with company who is willing to buck the trend, go full price, avoid sales and then use different campaigns.

“But as soon as it happens, and it will, I’d love to do a case study.”