Economics Government and Society Politics UK/Europe
Save to my profile 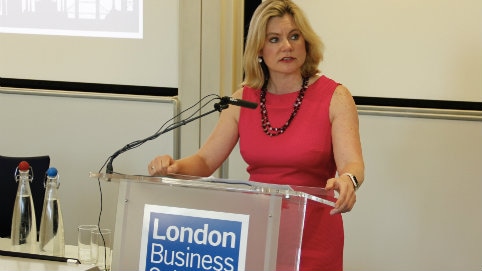 Generations of young Brits will have to live with the consequences for many years if voters opt to leave the EU in the upcoming referendum. That was MP Justine Greening’s stark warning when speaking about the union at London Business School (LBS).

The Secretary of State for International Development urged young voters to safeguard Britain’s economic and political future by choosing to remain in the EU. Greening, who is an LBS alumna, said: “The decision we make on 23 June will either open doors or close them on opportunity for Britain’s young people.

“In fact, the younger you are, the longer you have to live with the consequences. So for young people, this is no vote to leave to others.”

Greening said that while nearly 80% of over 65s vote in British elections, under half of 18–24 year-olds follow suit. “That works out at two million missing votes of young people, compared to if they voted as much as their grandparents. It’s a powerful voice, but it’s not being heard.”

Staying in the EU will benefit the UK’s economy and its negotiating power with other union members, according to Greening.

“It’s smart economics, because we keep access to the European free-trade area we call the single market of 500 million people,” she said. “We keep a say over the rules of doing business across Europe. That means more jobs, lower prices and more financial security for British families.

“And it’s smart diplomacy, because we can influence more widely by staying within the EU. As President Barack Obama said, this amplifies Britain’s influence.”

She added that Britain would be £36 billion worse off annually if it left the EU, hitting public spending on education, health, transport and infrastructure. Families would also suffer, losing £4,300 per household each year.

Greening believes if Britain left the EU, striking a new trade deal with the union would take two years. “There are 53 markets we have free trade with through the EU that we would leave and have to renegotiate,” she added.

The UK’s exports – 44% of which go to EU countries – would also suffer, Greening said. In contrast, only 8% of EU exports come to Britain.