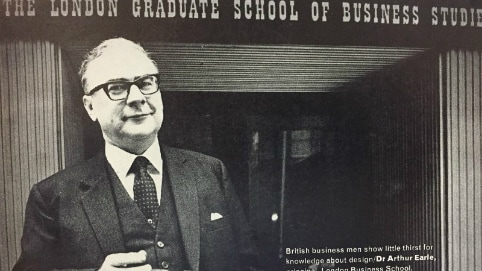 Dr Arthur Earle, Canadian businessman and founding Principal (then the term for Dean) of London Business School, died in Oakville, Ontario, on 12 January 2017.

Dr Earle grew up in Toronto during the Great Depression. He worked his way up from a junior position in a meatpacking firm, going on to train as an accountant. He served the Royal Canadian Navy with distinction in the Second World War, surviving a torpedo attack by German submarines.

He moved to London as a senior executive for the Canada Aluminium Company, gained a PhD at LSE and became CEO of the UK subsidiary of Hoover Ltd. In 1965 he was appointed Principal of the new London Graduate School of Business Studies (now London Business School). The newspaper advert for the post read: “Wanted: Egghead Tycoon”.

As Principal, Dr Earle led the introduction of the School’s first Masters, PhD, Sloan and Executive Education programmes. After five years in offices off Trafalgar Square, he oversaw the rebuilding of Sussex Place and then the move to Regent’s Park.

There were other lasting achievements. After visiting the US, he opted for the introduction of an MBA rather than the shorter diploma that British business would have preferred at the time. He also ensured that, within London University, the School could award their degrees but take all major decisions without being tied by administrative constraints.

After stepping down in 1972, he led the Canadian office of the executive search firm Boyden Associates. He is survived by his three children, seven grandchildren and four great-grandchildren.