The LBS alumni behind Renew want to shake up British politics 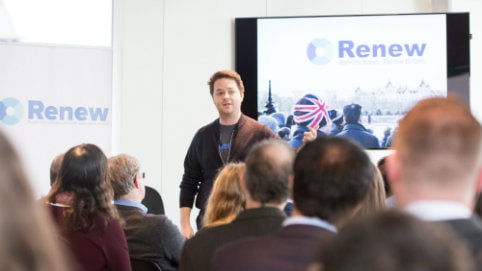 A British political party launched by London Business School (LBS) alumni in 2017 has set its sights on winning enough voters to form a government, according to one of its founders.

James Torrance, MBA graduate from LBS and one of three principals behind centrist party Renew, believes there is enough support for a political group that deals with the everyday issues affecting people in Britain.

“There are huge numbers of angry people, and they have every right to be angry, because many of them have been let down by successive generations of politicians who’ve taken advantage of their hopes and fears and tried to brush issues under the carpet,” he said.

“Many people have been left behind by globalisation, industrialisation and the shift towards a service economy. We see huge divides in society between the young and old, the north and south and people living in or outside cities. There’s also a huge wealth divide; life’s a lot easier if you have a house and money but, for many people, attaining either is incredibly difficult.”

Torrance and chief operating officer Chris Coghlan, an LBS Masters in Finance graduate and founder of charity Grow Movement, pitch Renew as an anti-Brexit party that will tackle the issues – such as the NHS and unemployment – that drove 52% of British people to vote to leave the European Union (EU). “People who rely on public services feel consistently let down by them,” Torrance said.

“As for opportunities, Chris and I have been very lucky to have had them, but that’s not something you can say about the vast majority of people in this country. For many, going to university is a distant hope.”

Despite admitting that a Brexit U-turn is unlikely, Torrance believes Renew can influence politicians who will get to vote on the UK’s final deal with the EU. “That will be the point where we can hopefully convince MPs to change their minds,” he said.

“You only need a few Tory rebels, of whom we think there are enough, and for the Labour Party to change its mind on Brexit – if it sees an opportunity to defeat the government – to force a rethink. That should then lead to a second referendum or vote against the final deal.”

Since inception, Renew has amassed 5,000 supporters, potential parliamentary candidates and volunteers across the UK through social media, news coverage and the ‘Listen to Britain’ tour. Torrance and his co-principal James Clark visited 25 towns and cities, from St Andrews to Exeter, over six weeks in early 2018 to chat to people about local issues affecting them.

When speaking to the public, Torrance and Clark asked four questions: what’s going well, what’s going badly, what gives them hope for the future and what worries them about the coming years. People in the northeast expressed concern about the lack of public transport between Middlesbrough and South Shields, while residents in Exeter discussed whether the A30 should become a motorway to cope with heavy traffic.

“We’re talking about different issues that need different solutions,” Torrance said. “We can’t say to people in both places, ‘We have the answer: railways’ – it’s about finding a national solution and then flexing it to local needs across the UK. Devolution is a dirty word in politics, but we’d give more power to local governments, to deal with these types of challenges.”

Torrance added that politicians have long failed to address people’s biggest concerns. “There was a recent article in the Financial Times  about the need for more radical policies among centrists, such as tax breaks for company share schemes. When you go around the country, you find that no one’s interested in that – they’re talking about infrastructure, public services or whether they can get a GP appointment lasting more than seven minutes.”

Renew became a reality after Torrance, Coghlan and Clarke stood as independent candidates – in Kensington, Battersea, and Bermondsey and Old Southwark respectively – during the 2017 general election. Torrance emailed Coghlan, even though the pair had never met, to see if he wanted to get together with him and Clark to discuss politics. After a few meetings, the group decided to launch their own political party, which is financed by donors and crowdfunding.

The party’s immediate priority is to see how Renew candidates perform when standing for local elections in Wandsworth, London, on 3 May 2018. The principals will then know whether the British public has an appetite for a centrist movement that aims to challenge the establishment.

“We want to govern the UK and think we have a platform that appeals to a wide variety of people,” Torrance said. “We have by-elections, local elections and maybe a general one coming up, so we have to keep chipping away and get a few MPs elected to reach a position where we tip the balance of power.”