Government Government and Society Leadership Politics
Save to my profile 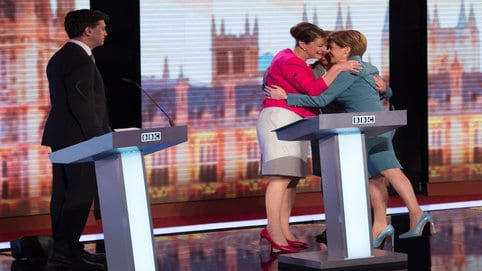 While it was well known the Prime Minster - and by association his deputy - wouldn't be joining fellow party leaders on stage this Thursday night, the effects of their absence were not quite as foreseeable.

Surely, as many voters thought, this was a risky tactic, akin to not showing up at a job interview in front of the entire nation.

But now the cameras have left London’s Methodist Central Hall, perhaps David Cameron’s early withdrawal from this second major cross-party debate can be seen as something of a masterstroke.

We look at how the party leaders fared in the prominent absence of Cameron and Nick Clegg - and Richard Hytner, Adjunct Professor of Marketing at London Business School and author of Consiglieri: Leading from the Shadows, explains why a leader does not have to be present to make their presence felt.

Elephant in the room

The topic of the Coalition leaders’ absence was rarely far from their opponents’ thoughts, and little time was wasted in calling Mr Cameron on his reluctance to defend his record.

Both Miliband and Nigel Farage of UKIP landed early blows while SNP’s Nicola Sturgeon branded the decision “a disgrace”.

Furthermore several debate questions became dominated by combined - and unchallenged - criticisms of the current regime. Housing, in particular, saw opponents united with Sturgeon and Bennett both labelling the Tories’ proposed extension of Help to Buy as “one of the worst ideas ever heard”.

A major opportunity afforded by Cameron’s absence in particular, was for the Sturgeon-led calls for a progressive, anti-austerity alliance - the spine of which would be formed by the SNP, Natalie Bennett’s Green Party and Leanne Wood of the Welsh nationalist party Plaid Cymru.

All three made it perfectly clear throughout the night that, while they favour a Labour government, they view Milband’s opposition as little more than “Tory-lite” without their radical influence.

Miliband faced repeated calls from the nationalist leaders to reject austerity and form an alliance with them and the Greens to “lock David Cameron out of Downing Street”. All three left-leaning parties made it categorical any partnership with the Tories is out of the question.

With Sturgeon and Wood representing their parties in front of the whole country and without the pressure of appealing solely to their region, both took to the debate with an element of abandon which only furthered their causes. The SNP leader in particular pulled no punches in setting out her goal of “getting rid of the Tories” - a phrase she used on numerous occasions.

Would such strong positions have been as tenable with the Conservative figurehead there to back himself up?

Sturgeon’s bullish style hit new heights during the question on hung parliaments. In offering Miliband the option of her party’s backing in a post-election deal, she made the promise of helping to make him “bolder” and the Labour party “better”.

The back and forth between  Miliband and Sturgeon proved the evening’s highlight and certainly stole the bulk of Friday morning’s headlines - the Scot declaring she would only side with Miliband if he were to reject austerity and be “better than the Tories”.

Richard Hytner, Adjunct Professor of Marketing at London Business School says there are take-home lessons for business leaders in terms of their relationship with their supporting cast.

“The outcome of last night’s TV debate was the further emergence, in the event of a hung Parliament, of Nicola Sturgeon as the potential kingmaker of a Labour-led coalition.

“She offered to make Ed Miliband a better leader. From a potential future No. 2 this act of seeming self-sacrifice would typically find favour with a leader. In business that offer would be made in private. Sturgeon made her offer live on television. She also added to her ‘I will make you better’ pledge of assistance, ‘if you are prepared to be better’.

“Imagine Sheryl Sandberg offering Mark Zuckerberg the chance to make him a better leader if only he would demonstrate his readiness to be one. It begs the question, should this Sturgeon/Miliband partnership ever form, formally assigned roles notwithstanding, who would be the puppet and who the master?”

To his credit, Miliband rode the wave - firstly insisting he was only interested in a majority win, then turning down Sturgeon’s offer on the basis of “fundamental disagreements” over a break-up of the Union.

Some too say Miliband was able to use Cameron’s absence to present himself in a prime ministerial light, shaking off the criticisms of before and emerging as a credible representation of the establishment, while the insurgent voices flapped around him.

And Miliband targeted Cameron directly in his pre-planned closing speech, staring down the camera urging his rival to “debate me one-on one, if you believe this election is about leadership”.

Leadership comes in many different forms and, strong performances aside, maybe the real stars of the night were the ones who weren’t actually there.

As Richard Hytner says: “A leader does not have to be present to make their presence felt.

“Cameron’s calculation to exempt himself may yet prove to have been the right one. Leave Ed Miliband to it, hoping that an unseemly scrap between Labour and the minority parties might render it in the eyes of viewers more of a lower league fixture than a Premier League affair.

“Leaders do not always have to be in the room, on stage or even in the country to shape the agenda. Staying out of the way may give you more control.”