Getting the lowest price can be a compelling reason for a customer to make a purchase. Tony Cram says there may be eight even more ...

Tony Cram
Organisational behaviour
Save to my profile 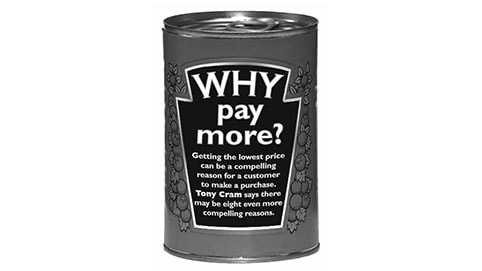 “We have the lowest price.” That does seem to say it all, doesn’t it? How does anyone compete with such a bold, basic, unbeatable claim? In every industry, there are mid-market players, quality brands, and premium producers who seek to win over consumers via an alternative logic – one that goes beyond having the lowest price. To succeed, competitors must help the buyer answer a simple question: “Why pay more?”

As I’ve researched this subject over a number of years, eight strategies – and one practice to avoid – have emerged that give pricing support to premium brands in competitive markets. If that’s the battle your business is fighting, consider:

Customers will pay more for quality when the product superiority is made visible and evident. Heinz changed the recipe of its cream of tomato soup in 2004. Originally launched in 1910, it was selling at a rate of 500,000 tins per week. Every day Heinz used enough tomatoes to fill an Olympicsized swimming pool. But poor margins compared with chilled soups, plus health trends against salt levels, as well as criticism from the Food Standards Agency, led Heinz to create a new recipe with 20 per cent less salt, 18 per cent less fat and 13 per cent more tomatoes. To bring about the change, Heinz recruited about 20,000 “souper troopers” and 1,000 lorries. In one day, it cleared six million tins of the old soup from supermarket shelves and replaced them with the new recipe cans. All the soup removed from the shelves was donated to the Salvation Army – an international Christian charity combining spiritual and social ministry.

What were the results of the new recipes and the publicity around them? Heinz increased prices by 20 per cent, with cream of tomato soup rising from around 49p per can to 59p for the new recipe. The company negotiated a 25-30 per cent increase in its share of space for soup in big supermarkets. Heinz saw its brand category value rise by more than £1.4 million in the final quarter of 2004, and the “Special” range gained 6 per cent household penetration within 16 weeks of launch.

2. Highlighting the risks of a low-price choice

A major reason for customers to pay more is to obtain security and avoid risks. Contemporary economists suggest that human economic behaviour is less rational than theoretical economists once believed. Where the outcomes of a series of exchanges are predictable as an overall average, but unpredictable for any specific transaction, most people prefer to avoid the risk of a loss, rather than take the chance of making a gain. This is true, even when the average expected outcome of the two actions would be the same. The motivation to avoid losses is greater than the appeal of the gains. The Economist speculated that this might be a consequence of evolution: in nature, with a food supply that is often barely adequate, losses that lead to the pangs of hunger are felt more keenly than the gains that lead to the comfort of being sated. For whatever reason, customers will likely pay more to avoid risks of losses.

As a house price bubble nears its peak, potential buyers are wary of taking on commitments lest house prices fall and they come to own a property with negative equity. Newcastle Building Society and mortgage broker John Charcol devised a creative solution. Within the package, mortgage payment protection will cover monthly payments for up to a year if the borrower is unable to work following redundancy, accident or sickness. If, during this time, the borrower chooses to sell the property, “negative equity insurance” kicks in that caps the borrower’s liability. There are lower mortgage rates on the marketplace, but this proposition will be attractive to the risk-averse.

Customers will also pay more when the trade-offs are explained to them. Buyers tend to underestimate the benefits unless the vendor quantifies them. You can highlight to industrial buyers the benefits of regular deliveries and consistent quality that help them run their businesses smoothly and profitably. Pricing experts, Nagle and Cressman writing in Marketing Management, offer more examples. A supplier of long-haul trucks quantified the value of features that created driver comfort by demonstrating factually the positive impact on driver retention. A telecom company showed the value of its superior reliability by calculating the revenue loss from service interruptions in their data lines.