Why entrepreneurs are like teenagers and need a protective mother

Ben Hallen highlights the value of accountability and guidance for entrepreneurs and their start-ups.

Benjamin L Hallen
Strategy and entrepreneurship
Save to my profile

Ben Hallen highlights the value of accountability and guidance for entrepreneurs and their start-ups. 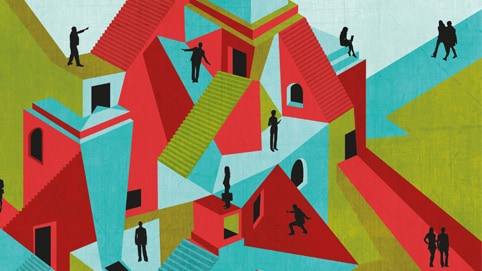 Full of energy, going through rapid changes, still learning to understand the world around them, and overconfident. For anyone who knows or once was a teenager, these characteristics ring all too true. Yet these traits are also consistently exhibited by entrepreneurs and their nascent startups. Like teenagers, entrepreneurs see the world full of possibilities and eager to make their mark on the world around them – and this is a good thing, especially for those of us who benefit from the new products and services that they bring to market.

On the other hand, the combination of overconfidence and the new situations in which they often find themselves can also create a lot of risks for both teenagers and entrepreneurs. In my experiences as a business school professor and former entrepreneur, some of the risks that entrepreneurs often encounter but fail to appreciate include: poor legal arrangements between founders, outsourcing the development of their technology to subpar contractors (who often in turn then outsource it to someone even less skilled), or engaging partners who might be more interested in competing with (rather than supporting) an entrepreneur’s startup. For entrepreneurs, the question is thus how they can learn to better recognise and navigate the risks that they face.

Recent research that I have done with Riitta Katila at Stanford and Jeff Rosenberger at Wealthfront, and which was recently accepted by the Academy of Management Journal, helps address this question. To explore how entrepreneurs identify and navigate risks, we explored the decision of startups to take corporate venture capital. In the words of the well-known venture capitalist Fred Wilson “corporations have other motives for doing venture capital... motives [that] aren’t particularly well aligned with founders, managers, and financial investors.” Corporate investors often invest in startups to decide whether they themselves want to enter the startup’s market or develop similar technologies. These risks have also been born out in academic research, especially for startups still in their earliest stages of development or lacking good trade secret protection.

Based on prior research in social networks, our initial hypothesis was that well-known and well-connected venture capitalists (VCs) would act as older brothers, using their existing relationships, reputations, and the threat of excluding corporations from future deals to ensure that corporate investors were well behaved – thereby making startups more willing to raise from corporate investors. Yet in testing this hypothesis using a sample of 700 high-technology ventures raising 18,168 investments over a twenty-five year period, we found that the social defences provided by corporate investors were more complex than either we or the prior literature suspected. While we did see indications of an older brother effect as startups with prominent VCs were more likely to later raise from corporate investors, this effect occurred only if the VCs were far-away from the startup.

In contrast, when a startup had prominent VC investors who were nearby, it was far less likely to later raise from corporate investors. Our interviews with entrepreneurs and venture capital firms suggested that this was due to nearby and experienced VCs often acting as protective mothers. In their role as protective mothers, these VCs would use frequent meetings with entrepreneurs to identify long-term risks that entrepreneurs might be taking and to suggest safer alternatives. Like teenagers whose parents are chaperoning a party, entrepreneurs at times voiced some frustrations about this monitoring and the need to justify their planned decisions. At the same time, entrepreneurs also appreciated that venture capitalists were identifying risks that the entrepreneurs themselves had not fully recognised.

For entrepreneurs, we believe our research has important implications in that it highlights the value of accountability and guidance. By having someone external to their startup who is both keeping a close eye on decisions and who is more experienced with either entrepreneurship or a given industry, entrepreneurs may become more disciplined in recognising and thinking through the risks associated with their choices. Accordingly, while entrepreneurs can go it alone, they may want to consider finding a protective mother in the form of either an investor or advisor who can help keep them from unnecessary risks along their journey.

The discussed research will be published by the Academy of Management Journal as "Unpacking Social Defenses: A Resource-Dependence Lens on Technology Ventures, Venture Capital, and Corporate Relationships" (doi:10.5465/amj.2012.0003)