Who is the biggest loser?

Timothy A Judge and Daniel M Cable, ‘When it comes to pay, do the thin win? The effect of weight on pay for men and women’, Journal of ...

Timothy A Judge and Daniel M Cable, ‘When it comes to pay, do the thin win? The effect of weight on pay for men and women’, Journal of Applied Psychology 96, no. 1, 2011. 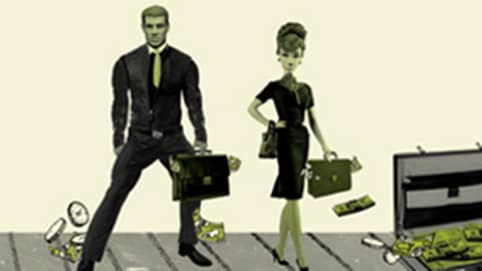 Chances are you have an idea of what an average waistline should look like for men and women within certain age ranges. According to a study by Timothy A Judge (Chair, Department of Management, University of Florida) and Daniel M Cable (Professor of Organisational Behaviour, London Business School), your vision, if you are an employer, could be costing Mr or Ms Average hundreds of thousands of dollars in compensation if he or she doesn’t conform.

So what do Mr and Ms Average look like? He has broad shoulders, great pecs and big biceps. If his physique sounds like a Photoshop picture plucked from a magazine, that’s because it is. He’s G.I. Joe; she’s Barbie.

Cable and Judge blame the media for distorting reality and presenting ‘ideal’ body types using pictures that have been digitally enhanced. Most women know intuitively that slim equates with attractiveness and that the standard has grown even leaner in the past decade. Now, people perceive the average female weight as overweight. Very thin women are idealised and more socially valued compared with their normal weight and obese peers.

Conversely, men are actually rewarded for gaining weight if they were below average weight to start with.To expose employer prejudice, the researchers focused first on Germany. In a second longer study, they followed American workers over a 25-year period.

Participants in the German study were individuals enrolled in the German Socio-Economic Panel Study (GSOEP). Cable and Judge’s calculations were based on interview questions that asked the volunteers about their wages and salaries, weight, gender, height, age and a myriad of other personal question that could determine compensation and changes in compensation.

The results proved what people might suspect: very thin women earned $3,981 per year more than their average-weight colleagues.Women who weighed two standard deviations (SD) above average weight earned the least — $1,848 less. Men, however, who weighed two SD below average earned $4,057 less (men’s compensation is higher across the board); and men who were two SD above average weight earned $146 less than the average man.The penalty for men who are very thin is nearly 28 times that for being very heavy.The biggest losers, however, are women who start a job thin and gain weight while on the job.

In a second study, the participants, all Americans, came from the National Longitudinal Surveys of Youth 1979 study.This study measured men’s and women’s weight and pay 15 times over a 25-year period. This gave Cable and Judge specific information on within-individual changes in weight and earnings.

They found that, surprisingly, very thin women who gained weight were penalised the most. Exactly what does gaining 25 pounds cost the average American woman? Over the course of a 25-year career, compared to a woman who is 25 pounds below average weight, the average-weight woman earns $389,300 less. She is the biggest loser.