For the business leader what are the most practical and immediate sporting inspirations?

For the business leader what are the most practical and immediate sporting inspirations? 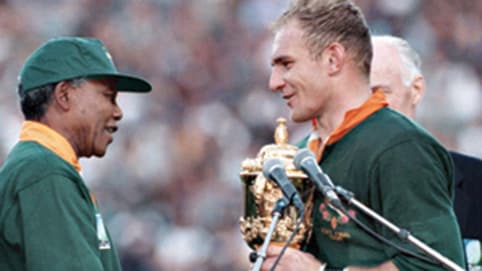 Sport is a crucible of leadership. Walking out to play at Old Trafford, the home of Manchester United, you will be faced with an average of 75,110 faces. Unless you are wearing the red of the home team, you are unlikely to be given a friendly reception. Sport gives leaders a moment to decide, a choice of clear paths and sporting leaders — from Joe Montana to Tom Brady of the New England Patriots; Sir Bobby Charlton to John Terry; Douglas Jardine to Andrew Strauss —  are celebrated and examined from every angle. But perhaps the greatest sporting leadership story of all time features a politician: Nelson Mandela. John Carlin’s book Playing the Enemy — which became the movie Invictus, starring Morgan Freeman — tells the inside story of the 1995 Rugby World Cup. It was a time when the newly free South Africa was still finding its way. Racial tensions were running high. Nelson Mandela appreciated, however, that the Rugby World Cup offered a once in a lifetime chance to bring the country together. Rugby was the white man’s game. In Robben Island, Mandela had learned Afrikaans in order to speak with his captors. He realised how close to their hearts rugby was. In 1995 he used this love of the game to bridge the gap between black and white. By wearing the South African Springboks rugby shirt at the final, and repeatedly sporting a Springboks cap in the months beforehand, Mandela made it clear that supporting the national team was open to all. It was symbolic, powerful, unifying and brave leadership.

For followers, stats are an essential lubricant of many sports. People attend cricket test matches and fill in their own score books with an array of different coloured pens. Cricket’s annual bible, Wisden Cricketers’ Almanack, comes complete with the averages of all the players as well as score sheets from all last year’s games. For aficionados it is essential reading. To discover that Kevin Pietersen’s average is 50.48 in test matches yet only 49.93 in first class matches is important. The appetite for stats — however obscure and arcane — has been fuelled by the global success of Michael Lewis’ book, Moneyball. It is now a movie starring Brad Pitt. Never have analytics appeared so powerful or worthwhile. In Moneyball, the unheralded Oakland As baseball team figured out how to beat the better financed big boys of baseball. The solution was to use sophisticated analysis to identify what really mattered in team performance. This turned conventional baseball wisdom — embodied by the troops of baseball coaches —completely on its head. The As, led by the indomitable Billy Beane, executed on the analytics perfectly. Now, as others have caught up on the analytical side, the As are finding life more difficult. And the business lesson? Accepted wisdom is often wrong and competing on the same basis as competitors with more resources doesn’t get you anywhere. You have to take a different route. The final lesson is perhaps the hardest. Once you are ahead, staying there is even harder.

Possibly the best football team of all time, Barca offer a variety of business lessons. First, there is the club’s ownership. It proclaims itself as “more than a club” and sees itself as an ambassador for Catalonia. Instead of being owned by a meddling billionaire, the club is owned by its supporters, the ultimate sporting partnership. This has not held the club back commercially. Its revenues are expected to exceed 400 million for last year making it the second biggest football club. Unfortunately, the biggest is Barca’s arch-rival Real Madrid (with revenues in 2009/10 of 438.6 million euros). Second, there is the Barca culture. Not only is it fan-focused, but there is also a very clear Barca style of playing the game. This enables and encourages continuity. The Barca ownership and culture help encourage a long-term focus at the club. Players are developed rather than desperately bought in. The players know what they have to do and then go about delivering it. The club is still regarded as more important than individuals. The ultimate Barcelona player is Lionel Messi who is widely acknowledged as the best player in the world but one who is miraculously ego free.

Executive coaching has become big business over recent years. But, when it comes to coaching, business leaders often look to sporting coaches for inspiration — everyone from Vince Lombardi with his treasure trove of witty motivational sayings to the present day coach of Real Madrid, Jose Mario dos Santos Felix Mourinho, or “the Special One” as he has proclaimed himself. Mourinho has won the ultimate club trophy, the European Champions League, with two clubs — the unsung Porto and then Internazionale in 2010. But what makes his coaching style different? From a technical point of view Mourinho hasn’t been an innovator. He initially championed pressao alta, high pressure, but his teams tend to be pragmatically defensive rather than flamboyant. He likes the reassurance of having the same support team around him. His assistants have tended to move with him from club to club. Likewise players. Those he favours have also moved. Ricardo Carvalho played for Mourinho at Porto, Chelsea and now Real Madrid. Communication is a vital element in Mourinho’s armoury. His career began when he acted as a translator for the English coach Sir Bobby Robson when he was leading Barcelona. In England with Chelsea, Mourinho put his English to entertainingly good use and then at Internazionale he ran his first press conference in Italian. The trouble is that Mourinho’s secret is personal: his unshakeable self-confidence and charisma.

No one in the football world has ever branded it like David Beckham. His wealth is estimated at £130 million and his neighbours include Tom Cruise and Jay Leno. And yet, Beckham is not the greatest player ever to play the game. Even in the current age his performances on the pitch have been eclipsed by the likes of Lionel Messi, Zinedine Zidane, Cristiano Ronaldo, Ronaldinho, and others. Beckham has succeeded in becoming more than a footballer for a variety of reasons. First of these is that he has made great career moves. He has usually left on a high and moved onto a new challenge. All of his moves have been bold and decisive.

Second, he has played a global game. Few English players have succeeded abroad; Beckham has done so at Real Madrid and then LA Galaxy.

Third, Beckham has learned and matured as his career developed. This sounds trite, but has often not been the case. It is easy to forget that he was vilified in the media after being sent off in a crucial England World Cup game in 1998. Beckham has learned his lessons and moved on.