Making and losing an industry

William Crapo Durant (1881–1947) was a brilliant entrepreneur who helped create the US automobile industry.

London Business School
Leadership Industries
Save to my profile

William Crapo Durant (1881–1947) was a brilliant entrepreneur who helped create the US automobile industry. 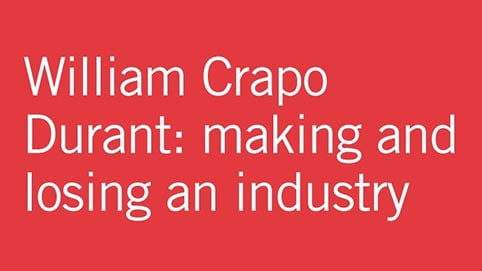 William Crapo Durant was born in Boston, Massachusetts, in 1861 and in 1875 moved with his mother and sister to Flint in Michigan, a town that would be at the heart of the emerging US automobile industry.

Although bright, Durant’s academic record was not a distinguished one – he left school at 16 over a dispute with the school principal, getting a job in lumberyard owned by a relative. He soon moved on, working as a medicine salesman and then a cigar salesman. After a series of jobs covering real estate, bookkeeping, fire insurance and, improbably, a spell as co-owner of an ice- rink, he came to rest at the Flint City Waterworks. An ailing business at the time, Durant soon turned the company around restoring it to profitability.

Having cut his business teeth on the waterworks the young Durant – he was barely 25 – went into business with another young man, Dallas Dort. The two men bought out a local businessman with $1,500 borrowed from the bank and founded the Flint Road Cart Company in 1886 (eventually the Durant-Dort Carriage Company). Their main product, a new two-wheeled horse- drawn carriage, proved spectacularly popular, with sales peaking at 75,000 in 1895. Durant and Dort earned enough money to retire had they wished. But for Durant, still in his thirties, it was just the beginning.

Between 1901 and 1904 the newly wealthy Durant spent much of his time in New York learning the finer points of finance and stockbroking. It was an interest that was to cost Durant dear in future years.

In 1904, sensing that the days of the horse- drawn cart might be coming to an end, Durant bought into the Buick Motor Corporation. On the strength of the automobile designed by David Buick he raised $1.5m in investment. David Buick, the Scots born inventor, left the company prematurely in 1906, dying a poor man.