Jürg Oleas talks about how to make innovating a habit, what makes a leader and how, when it comes to leadership, charisma just doesn’t ...

For an engineering company in a rapidly changing world, innovation is central, and in this interview with Richard Brass, Jürg Oleas talks about how to make innovating a habit, what makes a leader and how, when it comes to leadership, charisma just doesn’t count. 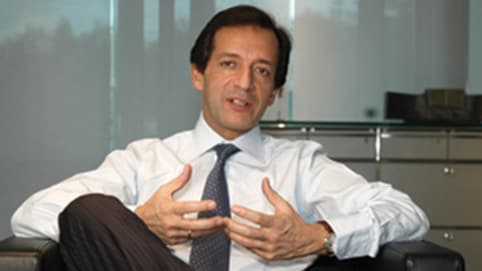 Innovation is essential to what GEA does. How can leadership foster innovation?

If you believe something is important for the company, then you have to show it on a daily level, to have it right in everybody’s mind, not only the top managers but every employee.

Therefore we do three different types of innovation at GEA.

One is at a very low level, which we call ideas improvement programmes, where every employee is encouraged day by day to improve small things around his work space, be it in factories or in offices or wherever. They collect points, the segment presidents get targets for the bonus and we have annual award-winners for the segments that have collected the most productive ideas. The second platform is the pure R&D people, who are sitting in labs trying to invent things. The third platform is innovation being done together with partners, in most cases with customers.

We make sure that the organisations, the managers and the employees are reminded every day that innovation is the backbone, that it is the most important thing for GEA to survive. Also we as an executive board are incentivised. A good part of our bonus is based on the amount of innovation we are able to bring into the pipeline.

The whole thing is about culture. We have the innovation award and we have a development award, which is the same procedure but for ideas in an early stage, where it will take three or four years before it will be sold to the customers, and we have several other awards. So we really drive this culture, from the daily ideas improvement programmes to the big innovation contest, so that everybody feels that this is something very important for GEA. If you really want to make it happen, if you want to make sure that it is perceived by the whole organisation as being important, you have to do it in such a way that every employee feels every day that this is something important.

Do you think the role of the leader is more to establish a culture as you have, rather than to make specific directions?

Absolutely. I have a very firm belief that you’re managing a company well if they don’t need you anymore. The day the organisation doesn’t need you, then you have done it perfectly. If the organisation needs you day by day, then something is wrong. So I see my key role in constantly assessing my top managers, talking to them, observing them. I often tell young high potentials that when I go into meetings I cannot judge the details of what they’re discussing, nor do I understand about some technical engineering details, nor do I understand a lot of details from accounting, but what I really focus on is, when somebody presents to me, to check whether he lives and dies for what he is trying to convince us, whether he really understands it, whether he is informed of all the details about what he’s doing, or whether he is just repeating something that he has heard from somebody else.

If, as sometimes happens, a manager comes with bad news to a review meeting, and if I have the feeling that he’s just reporting it and saying ‘Well, it’s bad luck, we have a deviation of minus five million’, and some figures, then there’s a ‘Take it or leave it, that’s how it is’ feeling. On the other hand, you have a manager who comes over with the same five million and almost cries and is passionate that he didn’t make it, and you really feel that he hates the situation he is in and he doesn’t want to go through such a situation again. I like that manager ten times more than the first one. If I feel that, if they have bad news, that they personally suffer, and if they have good news, that they enjoy it, having achieved something great, that’s a manager I like.

But I also always say to our top managers ‘Focus on things that you will remember for the rest of your life.’ If you achieve a high bonus that’s nice for you, but 20 years later when you tell stories to your grandchildren you will never tell them that in the year 2010 you achieved a nice bonus. But if you have made a new innovation, or if you have successfully launched a new manufacturing process in China, or if you have made a nice acquisition, or a much-needed and successful restructuring, those could be things which 20 years later you tell to your children or grandchildren, or you tell next week to your friends. You will never go and be proud and tell your friends that after five years you got a big bonus, but if you have achieved something great — which doesn’t have to be great volume-wise but it has to have an impact in GEA, it has to shape GEA — then you’re proud. We constantly discuss how top managers should focus on these things and not on detailed numbers and personal bonuses and these type of things.

Has anybody particularly influenced your approach to leadership?

I’ve had good and bad examples of bosses in my career. I learned from different bosses that so-called charisma and these type of things don’t play a role. You can be a very good leader even if you’re very introverted and calm and quiet. What is important is — it sounds simple but it is very important — that you do exactly what you say, that if you demand something from people then you do it 130 per cent yourself. So if you demand some behaviour from your people, you have to exaggerate with your own behaviour.

An example of this is compliance. We have of course very strict regulations on compliance — don’t invite customers out, don’t give them presents, don’t accept presents, all these things. But in order to make it clear that we really mean it, I’m always exaggerating. So if I am given even a $2 pencil, I give it back. I never accept a bottle of wine. Etcetera, etcetera.  As a top manager you have to exaggerate when you’re applying the standards yourself, in order to make sure that the organisation does it 100 per cent.

We have developed leadership standards for our organisation, all of them equally important. One says that top managers have to have the leadership gene, which we say cannot be learned. You cannot train somebody to like being number one and to hate being number two. Either he has that gene or he doesn’t.

Number two is management skills. This is something you can learn. Some people are born with better genes and some have to learn it more, but you can learn it. How to delegate, how to simplify complex stuff in order that the organisation can digest it, how to run projects, how to be bottomline- driven or cash-flow-driven — all these things can be learnt.

Number three is integrity — don’t do to other people things that you would not like them to do to you, even though the temptation can be very big. Be consistent and truthful in your actions. It comes from your parents, it depends on how you have been brought up, it is the influence of your family in your childhood, which made you this or that type of character.

We’re currently discussing adding a fifth one, which is creativity. I have observed in my career that it is always extremely good for a top manager to be creative, not in terms of being able to play the piano or paint nice paintings, but to quickly find solutions for challenges, to find options. If you have a problem in front of you, if the company faces a serious challenge like, for example, the crisis in 2009, then you have two ways to handle it. Either you have only one option and you follow that and if it’s the wrong strategy then you’re really dead, or you have different options. To create options means you have to be creative, to find several ways to solve the problem. That is an ability that I have observed is not given to everybody. Some people have it and some people lack it, but for the top manager it’s very important because one of the tasks of a top manager is to find solutions every day.

We also give examples. You can see in politics and history how dangerous it is if a leader has the leadership gene and the management know-how but not a clean character. And there are daily examples, not only in politics but also in industry, where people have the leadership gene but they become obsessed, way beyond passionate, and that can be extremely destructive. By making such simple examples you can explain it pretty simply to people.

The higher you are in the management levels, the more it becomes about coaching, about having a feeling for people, selecting the right people, putting the right combination together, because you can have two excellent leaders that you know of, but still the chemistry between them sometimes doesn’t work, and you have to recognise that early enough in order not to make a mistake, and try another combination. You have these pieces on the chessboard, and you know that this one is like a knight and can move one ahead and two to the left, and this one can only move straight or diagonally, and if you position them the right way, then the organisation is unbeatable.

What’s the most important piece of advice you could give to another manager about leadership?

Do things that you’ll remember in ten or 20 years. Don’t focus on the other things, as a top manager, because they will spoil your mood, take too much time and take you away from the big things which are really important. When you go home after work, ask yourself whether you did some micro-management and nitty-gritty things, or whether you really did the things that are important.