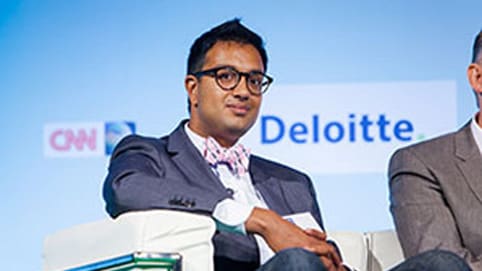 What was the genesis of the company?

I was part of a very large venture capital fund, Accel Partners, which has been a fund since 1983. I spent four years with them and then wanted to do something a lot smaller, at a much earlier stage working with companies which were very pure start-ups.  That's actually what I have much more fun with.  So I left Accel, found someone else one who wanted to do the same crazy thing: to set up a new European early stage fund. We thought it was going to take about 18 months which is about normal, but it took three years. In California, if we were doing this, we would have been done in six to 12 months.

Why did it take so long?

Europe is still not as risk-taking. It's not as bold as California and, in the history of European venture capital, very few venture firms have delivered phenomenal returns back to their investors. For us  phenomenal is giving an investor back $4 for every $1 they invest. I don't think any venture fund has done that in Europe.

It's very hard for a European company to become a multi-million dollar company without going through the effort of expanding country by country.  Historically, it was really hard for Europeans to get to scale. I think all this changed in 2007 -- mostly because of the App Store and Facebook, and now increasingly because of Google. The distribution platform has changed. Now, I think it's actually really interesting to be a venture capitalist in Europe.

Are attitudes in Europe changing, or do attitudes differ from country to country?

Germany -- with the exception of Berlin -- is less risk-seeking than, say, London would be. Stockholm is probably very similar to London. Unfortunately France is still very insular. If you're a French entrepreneur, you think about building to the French market first and foremost, when you really should be probably building to the English-speaking market.

The two biggest markets in the world right now are the English-speaking economy and then maybe the Chinese economy. If you're going to be building anything, say, a mobile app, if you're not targeting one of the two, you're probably targeting a smaller market. If you're a French company, you probably should be targeting the English-speaking market rather than only targeting the French market, but that's a hard decision. You don't see very many American companies building for the Chinese market.

Isn't the central fact behind American entrepreneurs that they've got a large domestic market?

Historically, that made a huge difference. It's six times bigger than the UK. Almost all the early adopters, at least as far as companies go, are in the US.  I think a lot of those things are changing.  The business world is so much more global. A very good example of this is WhatsApp. It is an American company, but got to scale because of the international markets. They specifically targeted users who had friends in other countries, or had family in other countries, who wanted to communicate with them in a low cost way. And they got those users on board, who then brought on board the American users, which then allowed them to crack the American market, but they did not start by winning the American market.

I think that formula is going to be increasingly common. Facebook is another good example.  Historically, almost all the Facebook mobile usage didn't take place in the US, it took place in places like India, the Philippines or Indonesia.  Facebook had to get very progressive about how to handle those kinds of customers.

American companies are having to think about the rest of the world much sooner and much faster than they anticipated.

How long does it take you to reach a judgement when an entrepreneur tells you they have a great idea for a business?  Is it an instant thing like meeting someone you like or dislike and making a decision on them within the first minute?

No, no. It's usually not in a minute. We're not that smart. I wish we were that clever!

But you do make quick judgements about the people and their ideas?

Yes and no. We've definitely done deals within 24 hours of meeting the entrepreneur, but those are usually in markets that we knew something about beforehand. I think our sweet spot as a fund – and I think a lot of venture funds are like this in California, but less so in Europe – is we focus on companies and services that are building on top of brand new disruptive platforms or brand new disruptive industries.

It could be something like Cisco has changed the configuration on all their routers and, as a result, you can put in and install a layer of software on top of these things and build a new kind of company. Or there ought to be a derivatives market for Bitcoin.

We try and find companies that are going to be brand new industry category leaders. A really good example is Facebook releasing an API (Application Programming Interface) to let you build third-party applications on top of Facebook. One of the applications that people came up with is playing video games on top of Facebook. If you had asked people in 2007, they would have said that perhaps people would send greetings cards or birthday cards to each other using Facebook, but  no-one's going to play a hard-core video game on top of Facebook. The truth is only revealed several years later when these companies actually scale or not. Those are the risks that we take.

In industries where we have done that thinking upfront, where we know that pieces are lining up and we understand the pieces, we can be very smart and direct with the entrepreneur about the questions that we have. In industries that we don't know as much about, we have to get very educated very, very fast, probably within a matter of weeks, to be able to have a clearer discussion with the entrepreneur. What we chase after is brand new industry categories. Half the time, it's fuzzy. We don't know what's actually changed in the industry, so we have to learn what's changed and we have to learn what they're building. There are deals that we've done where it's taken a month or two to process for us, because we're trying to learn what their industry is and what's actually changed. Yes, sometimes it's fast, sometimes it's slow. It depends on how much homework we've actually done.

We find that the strongest signal, in our industry, if you're an entrepreneur, however old you are, is if your first hire is someone who's out of reach, someone that you shouldn't have been able to hire. If your first hire is a very senior engineer in Google that you convinced to quit their job and join you, and they're a hell of a lot better programmer than you would ever have been, that's a really good sign. It means that the entrepreneur is punching way above his weight and, usually, if they do this once or twice, the pattern's sustained, and they tend to hire really great people.

Companies are not built by one or two people. One or two people get all the press because they're the founders. It's a collection of people that really need to come together to build great companies. If the entrepreneur hires really well, you've resolved a good chunk of the puzzle of collecting really great individuals. This doesn't take us very long to assess. Entrepreneurs can be very dynamic, but if they hire poorly underneath them, it's very hard for those businesses to succeed.

That the great companies tend to make some exceptional hires very early on is consistent.

So, your employee number one or number two is critical?

Yes, usually the first five. The first five give you a pretty good signal who the folks are going to be able to continually get.  You're always trying to raise the game by trying to hire better, and you can do this for a while and then, when you get to 1,000 people, 2,000 people, it gets very, very, very hard.  The average IQ or the average of however you measure talent will come down over time because each subsequent hire won't be strong as your initial hires, but in these early days you're going to be very careful.

I think that's what a lot of us are trying to avoid, but that's what happens when you're at 50,000 people and you're trying to hire number 50,001. In a small company, when there are ten people, number 11 can make a huge difference to some of the first ten.

How many companies are you invested in at the moment?

We started in March 2013 and we announced at the very end of the year, and we've invested in five companies – GoCardless; Campanja; Raptor; Deliveroo and llustre (since acquired by fab).

Are you happy with that rate of progress?

Yes. We don't think there's enough to justify doing more. I think Europe is still a smaller market. There are not that many markets that change in a given year in their industry that allow these new kinds of companies to get built. There are a bunch of other people that take this very seed approach to early stage investing, or they do 20/30/40/50 investments right across a series of things, because they don't know which ones they're going to stake, and they're going to double-down on the ones that do. We take a very different approach where we're very disciplined about what we choose to do. We really try and make sure that there is actually a market there that's actually shifting.