How sharing wealth makes us happy

Alexandra Falconer
Save to my profile

Every government wants to increase GDP in order to better the lives of its citizens. But if politicians want truly happy and productive people, they must ensure the growing wealth is distributed evenly, according to new research by Selin Kesebir 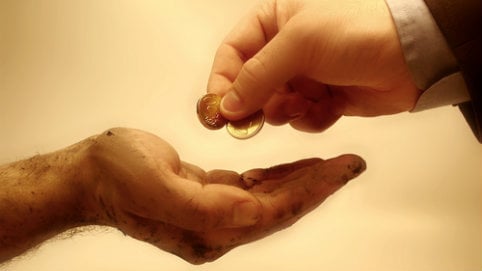 Between 1946 and 1970, the US economy boomed. But, the overall well-being of the American people didn’t go the same way. This is the 'Easterlin Paradox', named after economist Richard Easterlin who first explored it in 1974: wellbeing is more than having more, and more wealth does not always bring more happiness to a nation.

The observation hasn’t held up all that well. Economists have pointed out that certain countries, including the Netherlands, Sweden and the UK have indeed got happier as they have become wealthier. So what’s going on?

Selin Kesebir, Assistant Professor of Organisational Behaviour at London Business School, and Shigehiro Oishi, Professor of Psychology at the University of Virginia discovered that the paradox can be explained, at least partly, by something not considered until now: income inequality.

The pair looked at 34 countries and found that when the gap between wealthy and poor remains or grows as a country gets richer, overall happiness levels do not rise. When income inequality is taken into account then, the Easterlin Paradox isn’t so paradoxical any more.

By examining the relationship between GDP and income equality and comparing it to levels of wellbeing, they confirmed that for wealthier nations, the relationship between GDP and wellbeing was positive, after controlling for effects of income inequality. In other words, the citizens of a country like Finland, which has grown richer over time, did indeed also grow happier. Finland, like the other Scandinavian countries, is famed for its social progression.

“For a nation’s life satisfaction to increase, producing more wealth is not sufficient,” say Dr Kesebir and OIshi. “The fair distribution of the added wealth may critically determine whether life satisfaction will rise on the whole. On the basis of our findings, it is safe to say that if income and happiness go together, it is when income is distributed evenly. Even growth is happy growth, and uneven growth is unhappy growth. Considering the recent trend of growing income inequality in many parts of the world our findings suggest that more instances of the Easterlin Paradox will be observed, with economic growth not necessarily increasing the happiness of a country’s citizens.”

The UK is one of the most unequal developed nations in the world, according to an OECD (Organization for Economic Cooperation and Development) report published last year, warning that countries with a bigger gap between rich and poor risk stunting economic growth and damaging the fabric of society. The study echoed the findings of Dr Kesebir and OIshi, stating that for some countries, growth has disproportionately benefited high-income groups and left lower income households behind.

This doesn’t bode well for the nations at the top of the list: Chile, Mexico, Turkey, the US, Israel and the UK. Behind them are Greece, Estonia, Portugal and Japan. Researchers discovered that inequality across all 34 member states between 1985 and 2005 negatively affected GDP growth between 1990 and 2010.

One explanation for this is that poorer citizens tend to spend every last bit of their income, whereas richer people more often save it. Much of the extra money the wealthy keep under their belts doesn’t go into circulation in the real economy. This has a direct effect on the GDP of a country.

“This compelling evidence proves that addressing high and growing inequality is critical to promote strong and sustained growth and needs to be at the centre of the policy debate,” said OECD’s secretary general, Angel Gurria. So if the OECD have proved that inequality stunts GDP growth, and Dr Kesebir and OIshi have found that citizens would be happier and therefore more productive, increasing GDP even further, if the wealth of their country was shared equally, why isn’t every country in the world taking heed?

A common answer is that governments aren’t to blame. Globalisation and technological change have made most people less competitive, while the wealthy have become more competitive. That makes sense if you consider that the jobs most people did are now done by machines, computers or by outsourcing labour abroad to under-paid workers.

But this misses something. Political power has become increasingly concentrated into the hands of a corporate and financial elite that makes, or at least influences the economic rules of their society. Robert B. Reich, secretary of labour in the Clinton administration, said in Newsweek that reversing the trend of widening inequality requires reversing the upward pre-distributions within the rules of the market, and giving average people the bargaining power they need to get a larger share of the gain from growth.

Perhaps we should be looking to politics instead of economics to answer this particular problem. Whether your interest lies in GDP growth, or just being happy, if the country you live in doesn’t share its wealth around equally, nobody wins.