Failure: the key to success

Kathy Brewis
Innovation Failure Personal development
Save to my profile

There are two classic approaches to failure. One, epitomised by Winston Churchill, is bullish and relentlessly cheerful.


“Success consists of going from failure to failure without loss of enthusiasm.” Also in this camp are the Silicon Valley entrepreneurs who wear their failed start-ups as badges of honour. For a time, pharma giant Eli Lilly adopted the same view: in the 1990s it launched ‘failure parties’ to honour great research that flopped. But in the end, the word ‘failure’ proved just too demoralising and the ‘celebrations’ were scrapped.


Johnny Cash summed up the second approach: “You build on failure. You use it as a stepping stone. Close the door on the past, don’t dwell on it. You don’t let it have any of your energy, or any of your time, or any of your space.”


This is the default response of many big corporations to failure: keep it quiet; ignore it; hope it goes away. The attitude of most businesses is somewhere in between the two extremes. Leaders know that failures are meant to be valued and even celebrated. They buy into the theory, but don’t know how to put it into practice. Old habits die hard: bosses hold post-mortems when projects or products fail, grimly seeking to identify lessons learnt.


But for an organisation to hide its failures while it stumbles towards some imagined perfection can be a huge mistake. LBS’s Julian Birkinshaw suggests that simply burying failures in an attempt to forget them is itself an epic failure: “I have seen several companies adopt a zero-tolerance approach to failure – the person who failed gets fired, the failure gets swept under the carpet and everyone gets the message that this must not happen again. But this creates a fear culture. People follow the rules, whether they make sense or not, and no one dares try anything new. Not a recipe for success in today’s fast-moving business world.”


So how to give a business the best chance of survival through innovation? Tim Harford, author of Adapt, identifies three essential steps:


Birkinshaw observes: “When you take a business person with responsibilities and a budget and sit them down and ask, ‘Why don’t you do this as an experiment?’, they will say, ‘No, that won’t work. Let’s pilot it or do some more research’.


“Experimentation is beautiful in theory, but it’s very difficult for people to have the guts to follow through. You have to admit that you don’t know the right way forward – and nobody likes to admit that.” But truly innovative companies do understand the need to incorporate a tolerance of failure in their corporate culture. This has been investigated by Professor Rajesh Chandy.


He says: “Innovative companies often have asymmetric incentives for enterprise. Enterprising employees in these companies understand that the rewards for success will be much higher than any punishment for failure.


“It’s certainly not the case that failure has no negative consequences in these companies. Those responsible for failure may get their wings clipped, or may face higher burdens of justification the next time they propose something.


“But the incentive structure is such that if they succeed, the rewards will be disproportionately higher than any negative consequences should they fail. Moreover, innovative companies manage risk by having a diverse portfolio of innovation projects – some that are quite risky, and many others that are quite safe. They also look outside and capitalise on the risks that others are taking. By letting the ecosystem do some of the risk-taking, they reduce the risks to themselves.”


Birkinshaw recommends drawing up a balance sheet to assess a project’s return on failure. On one side, consider ‘assets’. These might include: What has been learned about customers’ needs and preferences? Is there a need to change underlying assumptions? What insights have been gained into future trends? What have you discovered about the way members of a team work together?


Set against this, look at ‘liabilities’. What were the costs – financial as well as less tangible things, such as damage to reputation or morale? Bottom line: What insights have you gained? And what was the bill?


Be alert – take a chance


Adam Kingl, Executive Director of Thought Leadership at LBS, maintains that a fundamental change in attitude is required if organisations are to innovate and succeed. “Realigning our position on failure, risk and experimentation is key,” he says. “You’re not going to spot every single thing that’s coming over the horizon, the next opportunity or threat. Better to build a capability throughout the whole organisation so that as many people as possible have a chance to spot and respond to what’s coming in the distance. Leadership is about enabling your team continually to experiment, respond and get in front. If you experiment, by definition you will be more agile.”


Kingl adds: “Aristotle said if you want to be a braver person, find a brave person and imitate them. Just by imitating ‘brave’, you will automatically be braver. That’s what experiments are. They give you the opportunity to try or just imitate ‘agility’. In so doing, you will be more agile in a year’s time.


“Why do you need to be agile? Because, as one CEO put it, business used to be like trying to spot trends and opportunities while on a swing – you’re always moving, but you can still keep an eye out. Today, it’s like trying to do it while you’re on a rollercoaster, so you need to experiment to build your agility muscles.”


Doesn’t this still feel a bit like flirting with danger? Birkinshaw has a four-step, risk-mitigation framework for the design of experiments (see box). 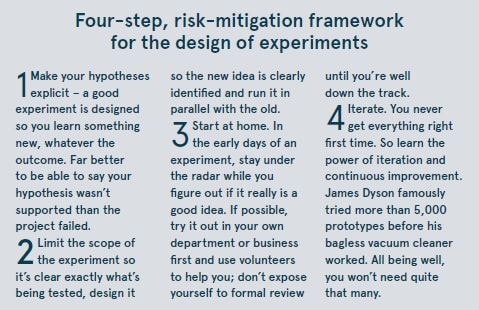 For a company to be genuinely innovative, it must be willing to try new ideas with a readiness to accept that many will be duds. For most organisations, this requires an entire shift in mindset.


Kingl carried out a survey in June 2016, asking more than 100 UK HR directors about their company’s reaction to failure. Some said: “Anyone who fails is quickly fired”, or “We never speak of it – it’s shameful”. Others were marginally more enlightened. They said: “‘Good’ failure is tolerated but not shared”, or “Failure is shared to a point, but there’s a stigma”.


A mere 3% of respondents said their company had a real understanding of the potential value of failure. It was, they said, “shared and even celebrated”.


Tom Watson, chief executive of IBM during the company’s glory years of the sixties and seventies, demonstrated a laudable attitude to the risks and rewards of experiments that failed. When a top salesman lost US$5 million on a project, Watson didn’t fire him. “Why would I fire you?” he said. “I’ve just spent five million dollars on your education.”


1. Make your hypotheses explicit – a good experiment is designed so you learn something new, whatever the outcome. Far better to be able to say your hypothesis wasn’t supported than the project failed.

2. Limit the scope of the experiment so it’s clear exactly what’s being tested, design it so the new idea is clearly identified and run it in parallel with the old.

3. Start at home. In the early days of an experiment, stay under the radar while you figure out if it really is a good idea. If possible, try it out in your own department or business first and use volunteers to help you; don’t expose yourself to formal review until you’re well down the track.

4. Iterate. You never get everything right first time. So learn the power of iteration and continuous improvement. James Dyson famously tried more than 5,000 prototypes before his bagless vacuum cleaner worked. All being well, you won’t need quite that many.

Innovation Technology is all about opening up to a new approach.