Fubles is where social networking meets the beautiful game. Des Dearlove is onside.

Fubles is where social networking meets the beautiful game. Des Dearlove is onside. 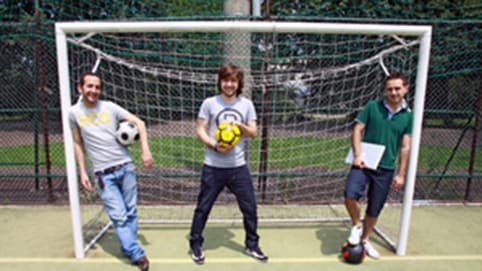 Mirko Trasciatti is an enthusiast. He is enthusiastic about business and even more enthusiastic about football. The 32-year-old Italian likes to play often. "If I don't play football at least twice a week I will go crazy. I always take my football kit with me wherever I go,” he says indicating the sports bag over his shoulder.

Happily, Trasciatti has found a job that allows him to combine his two passions. He is CEO and one of the founders of Fubles.com, a social networking website that brings football enthusiasts together to play matches and pursue their passion for the beautiful game.

Today, Fubles has 100,000 users, with communities in London, Paris, and Barcelona, as well as a string of Italian cities. Originally designed to convene football matches between people who live in Milan, the concept is now being exported around the world and expanded to other team sports.

A new way to do sport

In person, Trasciatti has a look of Giorgio Chiellini, the famous Juventus defender and Italian international, a resemblance he likes to acknowledge. "I am a midfielder,” he says, “but like Chiellini, I play hard!"

Trasciatti is in London to meet potential investors. (The business raised 300,000 Euros in its first round of funding and he is now looking to raise another 1 million Euros through a single investor or pool of investors.) What Fubles offers is a modern twist on the traditional kick around.

The company has pioneered a new way to consume sport, allowing players to “pick up” matches when and where they choose, even if they are a long way from their hometown. Casual players who don’t belong to a regular team, can join a match without prior knowledge of the other players. The only introduction they need is to be part of the Fubles community.

It works like this: players register at the Fubles.com website and receive an electronic playing card, with a photograph and their Fubles profile – the position they play, their age, gender and so on. They then assign their card to matches that are being organized on the website. Other users can see how many players have signed up – and even who they are and their preferred positions (goalkeepers are especially popular).

The average age of a Fubles player is 29 but all ages are catered for with at least one veteran of 75.

As Forbes noted: “Fubles.com is intelligently simple. Just choose what, when, where and who you want to play with.”

So far, so good: Fubles offers an efficient way to organise a football match. Yet, so do several other social media applications – including Doodle, Google Calendar, Evite, and even Facebook. But it doesn’t end there. What really makes Fubles exciting -- and differentiates it from these other tools -- is its peer-to-peer rating system.

After a game, players rate each other’s performance out of 10 – in the same way that newspapers routinely rate the professional players. After a game, players receive a message inviting them to go to the website to see how their performance was evaluated by the other players. These ratings also inform their Fubles playing card profile for other players to see. The ratings naturally give rise to post match analysis, banter, and punditry.

It is this social networking element that is the key to Fubles’ success, Trasciatti says. “There are alternatives but Fubles appeals to football enthusiasts. People rate each other’s performance after the game - and you have to use the site to see your ratings and participate in post match discussion.”

"This is the special ingredient that differentiates Fubles and excites people to have fun and take an interest,” says Trasciatti.

A passion for football can also kick off other social interaction. "People often meet through playing and then go for a beer or get to know each other socially,” explains Trasciatti. “For professional people away from their hometown it can be a godsend.”

Fubles began in Milan with an engineering student called Vito Zongoli. Like many would-be sports aficionados, Zongoli found that organising even a kick around with some friends was hugely time consuming and not always successful.

The trouble with team sports is that they rely on other people – you need the right number at the right place at the right time. Modern communication methods helped, but Zongoli found that even texts and email were irksome. What was needed, the young engineer realised, was a system that encouraged individual players to manage their own availability rather than waiting on someone else to organise games for them.

In April 2007, Zongoli started designing an online tool. The result was a self-managing platform that allowed players to sign up for games.  His timing was good – the arrival of the prototype Fubles website coincided with emerging social networks such as Facebook and Twitter.

The number of users and games started to grow. In a few months, the website evolved into a community. Zongoli was joined by other football enthusiasts – including Mirko Trasciatti and his twin brother, Stefano Rodriguez; Giuseppe De Giorgi; and Fabio Cancaré. Together, they formed a small team and started to think about the website as a business.

Trasciatti takes up the story: “I was getting frustrated for the same reasons as Vito, and I was looking around for an online tool to help organise football matches, so when I discovered Fubles, I thought this is it.”

In October 2009, Fubles was founded as a registered company, and within a few months a completely new version of the website was launched. The idea behind Fubles 2.0 was to combine some of the most popular social network attributes with specific team sports features, such as managing rosters, scoreboards, player rankings and statistics.

In less than a year, Fubles went from one thousand players in Milan to 25,000 users, participating in 7,000 matches around Italy – in cities such as Milan, Rome, Turin and Florence. In November 2010, Simone Gallace, the founder of the competitor website Bizoona joined the team and the two websites were eventually merged.

By now, Fubles was attracting national and international attention from the web innovation scene, and received several awards.  Newspapers and other media started writing stories about the sports networking website. The Fubles iPhone App, for example, was voted the best App of the year by Apple Italy. The 25-year-old who developed was headhunted by Apple.

By March 2011, Fubles had attracted the attention of several angel investors and was able to raise 300,000 Euros seed investment.

It was time to spread the Fubles communities around the world.

It seems to be working. There are now more than 100,000 players and Fubles communities are growing at an average of 11 percent a month. Most are still in Italy, but matches are being played in other cities – including London (300 now), Manchester, Barcelona, and Paris.

Eight people work for the company full-time, with a number of organisers in other cities who work part time. Fubles has gone viral.

“To date more than 20,000 games have been played - most of them by Italians and without referees  - that proves it works,” says Trasciatti. “There has been only one fight in all those games.  It is a very good way to organise sport. You don't have no shows -- or flakes. If someone doesn't turn up then everyone in the community knows and they get a reputation very quickly and people don't want that profile.

"Fubles has struck a chord with football lovers. People who want to play but maybe don't know people. You go to Fubles and put down your virtual playing card and you can select your level, ages, rank and gender. Fubles can be used for any team sport but its real following is football.”

So how does Fubles make money?  There are three main revenue sources. The first is via deals with sports centres. Fubles’ convening power allows it to channel customers to help optimise the use of pitches and other sports facilities.

The second source of revenue is traditional advertising on the website from the likes of Gillette, Puma, and Sky Sports.

But it is the third revenue stream that is most exciting and novel. Fubles runs interactive marketing initiatives with established brands. Companies such as Adidas, Bet Fair, and Red Bull view the website and its communities as a good way to get in touch with the grassroots of sports.

“People prefer to see brands embrace existing communities rather than create their own, “ explains Trasciatti. "We did an event with Adidas recently where we used the Fubles rankings to invite the top-rated players to a secret match. When they arrived they found that the game was being broadcast on Sky Sports and was sponsored by Adidas who supplied boots and kit. Alessandro Del Piero [who was in Italy’s 2006 World Cup winning team] was also there. The players loved it – they were 29-year old men behaving like children!”

As well as recognising the best players, the Fubles rating system lends itself to identifying the rising stars. There are plans, too, to use it to spot young players who might not otherwise get a chance to impress a professional club. Trasciatti hopes to run a competition in America one day using a Fubles to identify the best young players and then fly them to a European club for a trial.

So, how would Mirko Trasciatti sum up the Fubles appeal: "It is like a fantasy game but with real people playing real football,” he says. “It is a very modern platform to play football like old times.  I am living my passion! I believe you can live and play football.”