The brainchild of Henry de Bennetot and Alexis Garavel, SunEos wristbands are a safer way to carry cash at events.

The brainchild of Henry de Bennetot and Alexis Garavel, SunEos wristbands are a safer way to carry cash at events. 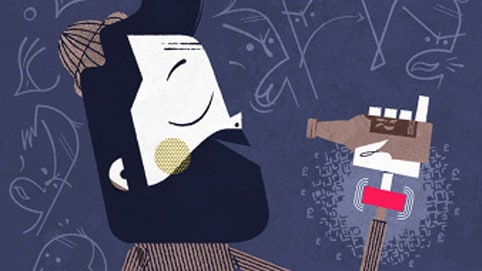 For event-goers who hate wasting time scrimmaging for the cloakroom or the bar only to discover their wallet has gone a new service from start-up SunEos may offer some comfort. SunEos, co-founded by Henry de Bennetot and Alexis Garavel, aims to keep event-goers (and organisers) happy by improving their overall experience. while there is no guarantee that the band plays in tune, at least you might spend less time queuing, and being certain of money to spend when you get there.

some of the best business concepts come from connecting unrelated ideas or experiences. That was certainly the case for de Bennetot. working in Hong Kong in finance, he was impressed by the local octopus pass, which allowed access to the underground and could also be used to pay for food and drink in numerous outlets. A year later, in the summer of 2012, de Bennetot was at a music festival near Paris. unfortunately, his wallet was stolen, his phone battery ran out of charge, and he had no way to pay for anything.

It took yet another year before he connected the two experiences to form a promising business. “The idea is to create a cashless system for any type of social event,” he says. “wearable technology is growing in popularity following the launch of Google Glass and other smart bands. we provide a tag or wristband to event-goers at the beginning of the event. They don’t need to carry cash or their wallet throughout the event; reducing the threat of dropping their money or having it stolen. Instead they pay with a wristband, topping it up like an oyster card if they need to. on the event organising side, it allows the organiser to run a cashless bar, which means less fraud. ten per cent of festival revenues are written off to fraud. It also means they serve around 25 per cent more customers because it is faster.”

the system can also be modified to include features such as entry and cloakroom ticketing. It also allows SunEos to capture demographic and sales data that promoters, organisers and concessions can use to improve their business performance.

At the time he had the idea for SunEos; de Bennetot was on the one-year Masters in Management programme at London Business school and heading for a job at J. P. Morgan. In his last term, he took an entrepreneurship module that involved creating an imaginary business from scratch, growing it and presenting it to a panel. the module freed his enthusiasm and, with fellow student Alexis Garavel, he came up with the SunEos concept.

By early 2014, de Bennetot and Garavel were already on the third phase of product development. They tried out the system at London Business school’s Halloween party event. “It went really well,” says de Bennetot. “There were 600 people at the event. we had our own bar and trialled a prototype of the system with a few students to showcase how much faster and more convenient it was. The results were good and, although there was some queuing, compared with the main bar it took just a third of the time to get served.”

Following the trial, the two worked on the product, using feedback to tweak it, adding more capabilities and features, and making it more robust. They also started to look for partners in the event management industry. The plan for 2014 is to target events at the UK’s 160- plus universities. It should be a big summer for SunEos and de Bennetot, who is already enjoying life as an entrepreneur.

“There is the freedom of choosing what to pursue, of having access to the strategic decisions that drive the business day-to-day, something I would have probably waited many years to do in the corporate world. Ten there is the thrill of using your money for a purpose, growing your own business, and growing people with you. plus you’re always on the run, looking for new ideas, looking for things to change, having the product, getting the feedback, and then transforming it all the time. It’s very exhilarating.”