Corrado Accardi used crowdfunding to back his business plan for a quality pizza takeaway chain.

Corrado Accardi used crowdfunding to back his business plan for a quality pizza takeaway chain. 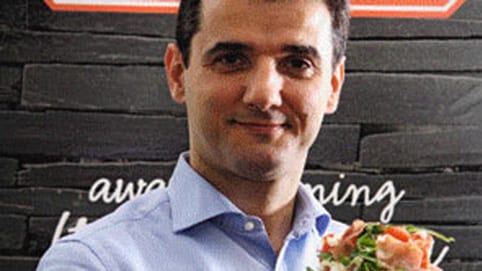 There is a new takeaway in town with a difference. Most hungry inhabitants of London will be familiar with its many burger bars, sandwich shops and ethnic takeaways. Now it is time to add another name to the capital’s menu of snacking cuisine – Pizza Rossa, and pizza al taglio (that’s pizza by the slice), founded by Corrado Accardi.

It has been an interesting journey for Accardi over the last few years, as he switched career from construction to catering. An Italian, chartered engineer Accardi arrived in London in 2002. He worked for large construction project management firms and then set up his own construction consultancy business. Most days he went out for lunch, and soon realised something was missing from his dining experience. In Italy there are some 15,000 takeaway pizzerias,” he says. “In London in 2009 there were about nine of a decent quality”.

Intrigued by the possibility of setting up his own pizza business, he started investigating the limited competition. “I spent a lot of time at lunchtime writing down turnover, sales splits, understanding what these restaurants were selling, how they were selling it, how much they were making for lunch and so on,” he says.

The way the pizzerias were run presented a limited business opportunity, as they couldn’t be scaled up. But what if he had a product that was as good as when freshly made, but was reheated? Then the pizza could be made in a central location and transported to nearby outlets, where it would be reheated and served quickly.

It was 2009, the financial markets had crashed, and construction project management activity was slow. Accardi decided to see how far the pizza idea would take him. He tracked down a pizza-making school in Italy and, taught by pizza makers with 25 years of experience, learnt how to make pizza that could be reheated. “What was unexpected was that the product not only tasted as good as freshly-cooked pizza, but better – it was made to be reheated,” he says. “And in order to be able to be reheated successfully it came with some ancillary characteristics that I hadn’t considered. It was highly digestible, with low calories, low yeast, low salt, which put together made a great product, leaving me thinking I was on to something.”

Accardi even worked three months in a pizzeria al taglio to see if his idea would work in practice. “In the mornings I made pizza, and in the afternoons I managed my projects,” he says. However, while the Pizza Rossa concept passed the taste test, his initial attempts to obtain finance left a sour taste in his mouth. “I tried to get traction with investors, spoke to business angels, investment firms, but I didn’t seem to have the credibility they wanted – or the team,” he says. “People didn’t believe I could make it.”

The pizza idea went on the back burner, and Accardi decided to take an Executive MBA to improve his career prospects in project management. But there was no escaping the pizza business. Two months at London Business School’s Entrepreneurship Summer School (ESS) made him even more determined to put Pizza Rossa back on the start-up menu. He wound down his project management activities and from January 2013 devoted most of his time to developing the pizza business, while completing his MBA. ESS also led Accardi to his two co-founders, Luca Magnani and Dan Einzig, and non-executive director Robin Walker, who has decades of experience in international food management.

With a strong management team behind him, Accardi took an unorthodox route to finance the business – crowd-funding. The proposal proved extremely palatable to investors, raising £440,000 in total. Meanwhile Accardi was winning a bunch of business plan competitions.

So, by the beginning of 2014, Pizza Rossa was fully funded, with Accardi setting up the central production kitchens and sourcing a number of pizzeria sites in the City of London. Response from pop-up pizzeria events has been excellent. “We had between 80 to 90 per cent liked it or loved it customer feedback,” he says.

Accardi has big plans for Pizza Rossa. There is room for 20 outlets in London’s square mile alone, he says. And then there is franchisee interest from the Americas, the Middle East and the Far East, already. Wherever you live, a slice of Pizza Rossa’s tasty and healthy pizza al taglio may soon be just around the corner.