Take a fascination with wide open spaces and business as a force for good, add in an unlikely raw material, and the unique result is Kora.

Take a fascination with wide open spaces and business as a force for good, add in an unlikely raw material, and the unique result is Kora. 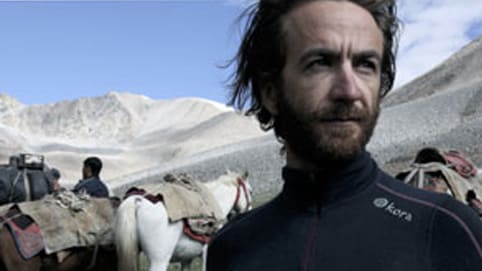 Kora is the Tibetan meditative practice of circumambulating a sacred place, often a mountain, the practitioner travelling full circle, paying respect to the mountain gods, nature and the environment. It is an apt name for Michael Kleinwort’s new venture, which also involved a personal journey of discovery. Kleinwort has created a social enterprise that produces high performance sportswear for extreme climates, while supporting the Tibetan nomads who provide the wool from which the clothes are made.

Kleinwort has always been interested in corporate social responsibility (CSR) and social impact. After taking a History MA, his original career plan was to get into conservation development, and he worked on projects in Kenya, Mozambique, and Zimbabwe.

At the time, the concept of social entrepreneurship was relatively new. A seminal work on the subject, The Meaning of Social Entrepreneurship, by Gregory Dees, had only recently been published in 1998 (then revised in 2001). Even the study of CSR, a concept that had gathered momentum in the 1950s and 1960s, was still developing. Michael Porter’s ground-breaking Harvard Business Review article ‘Strategy and Society: The Link between Competitive Advantage and Corporate Social Responsibility,’ only appeared in 2006.

Excited by the potential of CSR and social entrepreneurship to make a difference to people’s lives, Kleinwort embarked on a PhD, focusing on the question: ‘Can the private sector achieve development and conservation objectives?’ Or, put more simply, says Kleinwort, “Could a business do good?” The study involved a private-sector led community conservation project in Mozambique that allowed him to examine at close quarters how privately funded structures might be able to deliver development objectives. But Kleinwort became disillusioned during his time in Africa.

When the opportunity to work in China arose, Kleinwort took it. He started there in 2005, with the trade section of the EC delegation in Beijing. “Originally it was for six months,” he says. “China was progressing at a phenomenal speed,” says Kleinwort. “It was a fascinating country, and I soon decided that I wanted to stay.”

He enrolled on a Mandarin course at Qinghua University in Beijing, and by mid-2006 was working for a consultancy in the Chinese capital that advised multinationals on various government-related issues in China. Part of his job involved interacting with the CSR departments of firms, and meeting the NGOs and social enterprises that started appearing in Beijing. It was around about this time that he began to consider starting his own business.

“When I look back on it, there are so many different parts of the decision that came together,” he says. “One is my passion for the outdoors. I love travelling to out-of-the- way places, and I love outdoor sports, whether trekking, back-country skiing, trail running or mountain biking. Physically and mentally I’m into anything that takes you of the beaten track. I love the wilderness, big open spaces, and I have a lot of respect for people who live and survive in those environments.”

Another factor was Kleinwort’s belief in business as a force for good. He wanted a project that had a social impact, but was sustainable through its own means rather than through donations.

And then, on a more practical side, because of his love of the outdoors, he was aware of the rise over the last decade of merino wool as a performance material. Before that, garments made from synthetic fibres were commonly used as part of a clothes layering system to protect people engaging in outdoor sports.

These were the three strands that Kleinwort began to weave together to create his new business. During his time in China, he had done a lot of trekking in the Himalayas, which took him to high altitudes and the remote wilderness next to the Tibetan Autonomous Region. It was on such a trek that Kleinwort first met the animal that was to change his life. Yaks are the cattle of the Himalayas and Tibetan Plateau. They are used by locals for meat, milk, butter and transport – even their dried droppings are used as a source of fuel. Physically adapted to survive in the harsh environment of the mountains, yaks are covered in shaggy hair and dense woollen undercoats.

“At one point, on one of these trips staying with nomads, I remember seeing these incredible animals at 4,200 metres, and thinking that they looked decidedly unperturbed, comfortable even, despite it being exceptionally cold,” he says. “It was by talking to the nomads and realising that wool from this animal could be collected that the idea came up.”

In 2010, Kleinwort arrived in the UK to participate in London Business School’s Entrepreneurship Summer School programme. “The reason I wanted to do the course was that it gave me some structure and guidance for questioning the business idea. In focusing on the initial market research, costs and potential business models, it got me to question the opportunity as a whole. But I still needed to see if the product was technically possible. It was only then that I would be able to test whether there really was a market for it. Of course I did not know at the time how long it would take to set up.”

In 2010, determined to see his business idea through, Kleinwort returned to China. “The first step, which I’d started before the course, was plundering my network to find anybody who was involved in ethical trade, ethical fashion, or had any connection with manufacturing in China, especially in sportswear,” he says.

From this exercise he found his designer, which in turn led to other contacts. The garment manufacturing process follows a well-worn path. “Your raw wool needs to be cleaned and sorted, then a process called dehairing gives you wool that can be made into yarn,” says Kleinwort. “That enables you to make your fabric. Then the fabric is cut and sewn into a fnal garment.”

Finding a manufacturer to produce a yarn or fabric from yak wool was tougher than expected. A lot of factories were used to working with cotton, merino wool or cashmere. Few had worked in yak’s wool; most had never heard of it – he had to show them a photo.

Kleinwort had given up his home in Beijing, and was living a nomadic life, sleeping on a friend’s sofa and catching a plane every other day as he scoured China for yarn producers and fabric mills that would work with him. The persistence paid of when he found yarn spinners who could, initially, source the wool themselves, and make yarn to take to a mill. A fabric manufacturer eventually followed. “That was a big moment for me,” he says. “If nobody had been willing to try, that would have been it, so I was lucky these guys were willing to give it a go.”

Sourcing the manufacturers was just the start. The first prototype garments produced, Kleinwort gave them a thorough trail test, trekking through the mountains with Jeff Fuchs, the award- winning explorer and mountaineer. They trekked through high passes and low valleys, from the cold to desert-like conditions. “The prototypes were brilliant. We were both very impressed. The fabric was breathing, it was wicking the moisture away from the body, so we stayed dry and really warm. That was a great confidence boost.”

Aiming to get his base layer sportswear in the shops for winter 2013, Kleinwort got the fabric delivered to the garment maker ready for a bulk order. It was then that his business plans almost unravelled. Luckily, he also had a prototype garment made up so he could test it himself. Heading up the mountain again to organise his next purchase of raw wool, he noticed that the sleeve was riding up his wrist. Closer examination revealed that the garment had shrunk. Alarmed, Kleinwort quickly got in touch with the garment makers, who were, that same morning, scheduled to begin cutting the fabric for the garments.

Going over the entire process in detail, Kleinwort tracked down the issue and fixed the problem. More testing followed, including intensive machine washing. The fabric performed well, so Kleinwort ordered the first run of garments.

Kora’s ShoLa base layers are a specialist product, not aimed at the mass market. For the business to work, Kleinwort needs to target independent retailers, and create a buzz about the product in the outdoors sports community that will, he hopes, drive people to Kora’s website. That is one reason for establishing the development athlete programme, Kora’s ongoing product testing and R&D programme. “The product is reviewed by development athletes – mountain professionals, ultra runners, and semi-pro athletes,” says Kleinwort. “They test the clothes to the maximum, share photos, and give me feedback. As well as allowing us to monitor fabric performance through a range of activities and climactic conditions, this feedback allows us to continue improving our designs, and share these stories with our online followers. Ultimately, it is how customers respond that will decide the company’s success. No matter how much I explain how much better the material is, or how many test results we have to prove that, it comes down to whether it works effectively for the person who is using it.”

Kleinwort has always been very clear that two objectives are fundamental to his business. One is that he produces a performance fabric for active use; the other that the wool must be bought directly from nomadic communities, with the business run as a social enterprise.

Both objectives have been met. Kleinwort buys the yak’s wool directly from a group of Tibetan nomads. Traditionally the nomads go to town during an eight to ten week buying season, and sell at whatever price the wool traders offer. “We agreed to buy all the wool from the cooperative members, but not lock them in,” he says. “After reviewing the prices set by the traders, we set ours at a middle point. The nomads could sell at that price at any time or, if they wanted to sell to one of the other traders for a better price, then they could. Also we agreed to pay them a stipend at the end of the season, that works out at about ten per cent of what they sold to us.”

The stipend was a way of securing the relationship. “What was important to me was that we kept on buying from the same people year after year,” he says. “So we can see who we are helping, if we are helping, and we can monitor the impact of our business as we grow.”

It may have taken a little while, but it seems that Kleinwort has come full circle, finally answering the question he posed in his PhD: can a business do good?

“That’s a question I’ll continue asking myself. Every year it will be the same thing: What is our impact? How are we helping these people? Are we still helping them? Are we helping them more?,” he says. “It’s an ongoing process, because it would be very easy to lose sight of the original motivations. But it’s certainly been an exciting journey so far.”