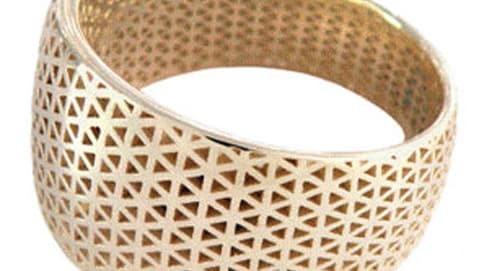 Three-dimensional printing is big news. If media reports are to be believed, within a few years we will all be producing consumer goods in the comfort of our homes. In reality it may take several years for 3D printers to become a standard domestic appliance. In the meantime, the technology is here, and companies such as Banneya, founded by Nimesh Thakrar, are making good use of it.

“Banneya is a platform that harnesses the power of 3D printing in precious metals, to allow digital fashion designers to create and sell their designs to the end consumer,” says Thakrar. “A designer uploads their digital designs to our website and then, when a customer places an order, they can customise that design, creating a one-of bespoke piece. We 3D print and deliver the piece, with the designer receiving a royalty.”

Thakrar was in automotive consultancy and then part of the Super-Aguri Honda F1 team before joining Amazon, where he worked in the fashion team as a product Manager. It was sitting at his desk there, in 2012, that he had the idea for Banneya, after reading an article about 3D printing.

“It was a case of rediscovering the technology I first came across in my university days, where they had a 3D printer in the engineering workshop. It had developed from being able to create a simple rapid prototype to the stage where you could create end consumer products straight from the printer, and with an extended range of materials, including metals. Once I’d refound the technology, I soon realised the impact it would have in the future, especially around consumer products.”

Convinced his idea had potential, Thakrar quit Amazon to take up a place in the London Business School Incubator. “Having thought about and evaluated many ideas over the years, I finally spotted the right opportunity. The timing was right, so I went for it,” he says. “I always knew that once I’d found the right opportunity it was a case of taking that leap of faith. That’s the very first thing you do as a budding entrepreneur.”

As it stands today, to get their designs to market, the designers have to tap into a cottage industry of suppliers and finishing companies. They have to invest time and effort into finding local suppliers and manufacturing companies, building relationships, and making sure that the translation of the design and quality of the end product is satisfactory. It is a time-consuming process, with numerous potential pitfalls that get in the way of the jewellery designer’s core talent – designing.

Banneya cuts out the hassle, democratising the manufacturing process, and providing a direct route to market for the designers. Thakrar has already assessed and evaluated a range of potential production partners, built a front-end website, and covered payment and order fulfilment, leaving the designers to focus on the design rather than worrying about manufacturing and inventory.

As Thakrar acknowledges, thinking about running a business one day is one thing, but being a “wantrepreneur” is a long way from actually getting out there and doing it. And he seems happy with life as an entrepreneur. “I wouldn’t do anything else. It’s about creating value, that’s what we are all trying to achieve – building a business that you can be proud of, known for its brand values, customer experience and quality. It’s something you can get really passionate about. It is a way of living.”