DeViehl coffee cups are pushing the frontiers of luxury goods. LBSR reports how.

DeViehl coffee cups are pushing the frontiers of luxury goods. LBSR reports how. 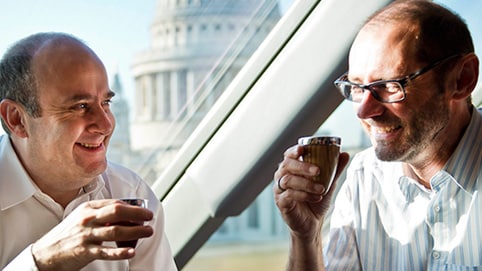 Despite the lengthy economic downturn, a taste for the finer things in life shows little signs of diminishing. Market research firm Euromonitor International, estimated global luxury goods sales of 2013 to be in excess $318bn. while a recent report by Fondazione Altagamma, the Italian luxury goods industry trade association, Boston Consulting Group, and Exane BNP Paribas, predicted spending on luxury personal items and experiences will be €880bn by 2020.

Luxury goods cover a wide range of activities. There are fast cars and bespoke suits, fabulous watches and beautiful jewellery, crisp cotton sheets and hand-stitched loafers. And now you can add a new item to the list as luxury comes to the humble coffee cup, courtesy of Jonathan Strauss and Andreas Bös, co-founders of DeViehl.

Coffee is a luxury business. You can pay many thousands of dollars for a top of the range domestic espresso machine. Or you can buy kopi luwak, coffee beans that have passed through the digestive tract of a common palm civet. They are a steal at around $600 a pound. But when you have made your coffee from your luxury coffee beans, using your luxury coffee maker, what do you use to drink that coffee from?

It is a question Strauss and Bös, who met at London Business School, must have pondered when they were discussing various ideas for start-ups. “we were looking at coffee and changes in the coffee market and industry. Both of us love coffee, both of us are pretty knowledgeable about coffee, and we were looking at market opportunities, what was there in the market and where there were potential niches that we could explore. It dawned on us that there was a vacant niche – nobody was producing fabulous coffee cups,” says Strauss. So that is what Strauss and Bös set out to create.

At the time both Strauss and Bös were taking the 12-month Sloan Fellowship programme at London Business School. Strauss’ background is in the luxury goods industry; he had worked for rotary watches out of Switzerland for some 15 years, building up distribution of the brand in Europe, US, and South Africa. Bös had a background in engineering.

“After working for 20 years or so, I wanted an opportunity to have some time out, reassess my priorities, and potentially look for new challenges and opportunities. That was my major motivation for doing the Sloan programme,” says Strauss.

The initial idea for the new business came in October 2011 and between October and December, Strauss and Bös talked it over, bouncing ideas back and forth and continuing to develop the concept. They also researched what other products were available in the market. By the time they reached the end of the programme that December, both felt that it was worthwhile taking the idea a little further.

“Just before Christmas we had tentative discussions with a designer who I’d worked with in the watch industry to perfect the design we had,” says Strauss. “She went away, and over Christmas worked on our ideas and proposals. When we met again in January 2012 we felt the design was along the right lines.”

Over the next two months Strauss and Bös worked hard to develop the concept. This involved the branding, the logo, the positioning of the product and collateral material, such as the packaging and display.

The aim was to get something tangible that they could show to people and get input from to decide whether the business was worth investing more resources in. During this time they both reached out to their networks.

“One of the challenges in the luxury goods industry is that the product is very emotional,” says Strauss. “It’s not like a fast moving consumer good where there are close parallels with other products that you can base decisions on. We were developing a product where we had a hunch that the market existed. However, there was no other comparable product in that space. That makes it much harder to assess the opportunity in the early stages. So you try and mitigate the risk by talking to people, by getting input, and a lot of that comes from those people with deep industry knowledge.”

No prototype product existed at this point, just pictures. The next significant milestone was May 2012, and the Innovation in Luxury competition organised by London Business School and Walpole, the organisation that represents the British luxury industry, in association with law firm Charles Russell and the Financial Times.

It was perfect timing as it gave Strauss and Bös an incentive to hone the business plan and concept. As it turned out it was a good decision to enter; they made it through the pre-selection process, and finished as one of the runners-up. The panel included a number of professionals from the luxury goods industry, including Michael Ward, managing director of Harrods.

“He asked us to come and see him after the competition,” says Strauss. “He was very enthusiastic about the business and introduced us to other top level managers at Harrods. They clearly know the luxury business extremely well. Really that was the catalyst for us, you can’t get much better validation of what we were doing than that. As you go through the process you set yourself signposts and milestones. One was the approval of potential retailers to take on the brand, so with that we decided to take the next step – the leap of faith that involved a more substantial investment – and that was to engineer the product.”

So what makes a good luxury coffee cup? It is a combination of technology, craftsmanship, and design, at a level of quality where you know that there have been no compromises in producing the cup, says Strauss.

There is the technological sophistication for a start. DeViehl’s coffee cups are engineered so that the insulation keeps your coffee at its optimum temperature for longer. They have an optimised inner form, determined through computational fluid dynamics – the technology used to design F1 cars – that ensures that you get the perfect crema on your coffee. Then there is the artisanal craftsmanship that goes into producing the product, using wood, leather, marble and carbon-fibre.

“It actually enhances the coffee drinking experience. Not only by looking and feeling beautiful, but it also allows you to appreciate your coffee to a higher degree than you would otherwise,” says Strauss.

“The texture of the coffee is improved through the froth, the foam at the top. You have got a beautiful and tactile shape to hold – it doesn’t have a handle, so you can hold it in your hand. Research shows that people don’t actually like to hold a cup by its handle as it is an imbalanced way of holding it. People like to cradle the cup in their hands. So it aims to satisfy the drinker on multiple levels.”

Engineering the product to their exact standards proved far from straightforward. There were, says Strauss, periods of extreme frustration along the way when they were absolutely exasperated. The engineering took longer than they had expected – five months to get it right through a process of various iterations, refinements, prototypes being made in various materials, 3D printed items, until they finally got something that they thought was feasible.

Once that was done, the search was on to find the component suppliers that could produce it. “We had to find specialists in the different materials. You work with these people and that takes a huge amount of time and patience. You may get to the second or third prototype from a particular specialist and realise that they can’t do it,” says Strauss.

“And then you have to start from scratch with somebody else. In the meantime, you are not generating any income and your pockets are not hugely deep. You need to be single minded. We were extremely certain of the end goal, of the opportunity. Without that I don’t think that we would have persevered to get where we were.”

Sourcing the different luxury materials is a good example of the complexities involved. After some extensive networking, acquiring a list of potential contacts, Bös and Strauss travelled across Europe tracking down people with the necessary craftsmanship.

The leatherwork is done in France through a company Strauss knew from the watch industry. The artisan leatherworkers are skilled in the technique of gainerie, which involves hand stretching a single piece of leather over a rigid object. The exotic woods, zebrano and cocobolo rosewood, are hand turned on a lathe in a small workshop in Germany and have five levels of lacquer applied. They found the marble and stone expertise in Italy.

From the end of 2012 through to April 2013, Bös and Strauss were prototyping and sampling until, finally, they were happy with the cups. In March, they returned to Harrods to show them the results. The meeting was a success, Harrods agreed to stock the product. All that remained was for Bös and Strauss to arrange for the product to be produced.

“That was another key step,” says Strauss. “We have engineered our product, found the suppliers, and now we are going to tool up for it. That means more investment; making pre-production samples is one thing, but this was something you do in limited volumes. You get the first sets of tools, perhaps things are not quite right, you refine them and so on – that took us until about October.

“When you are talking about a luxury product you are talking about attention to detail from A to Z. That extends to display. Coffee cups have never previously been sold as luxury items. Look in a department store, and more often than not the coffee cups will be stacked on top of each other, the cups positioned upside down. There is no concept of retail theatre, or of enhancing the purchasing experience, a concept very much evident in other luxury products.”

Bös and Strauss made sure that everything the customer experienced in connection with their coffee cups, the lighting, the display, the information provided by the retail assistants, would shout luxury.

The product was launched at the beginning of December 2013 in Harrods. Sell through has substantially surpassed expectation. Following the launch, DeViehl received considerable global publicity, on the back of which it has recently launched with other leading luxury retailers in the UK and is following up approaches from leading distributors internationally.

“We’ve shown that we can develop the concept, engineer it, market it, open up with the leading luxury retailer globally. The product is selling well and customers are placing repeat orders, so now we are actively moving forward to raise money,” says Strauss. “It is a huge thrill having an idea, developing it, and then seeing that product on the shelf in the store and people buying it.”