Should you invest in emerging markets?

The latest Global Investment Returns Yearbook yields some surprising insights into varying returns around the world.

The term “emerging markets” (EMs) was coined almost four decades ago to embrace middle-income developing countries in transition to developed status. In the early 1990s, a further category was identified – “frontier markets” (FMs) – to describe markets too small, risky or illiquid to make it into the EM category.

Emerging markets are far too important for investors to ignore. Today’s EMs and FMs make up 55% of the world’s Gross Domestic Product (GDP) at purchasing power parity, as compared with 37% for developed markets (DMs). The remaining 28% of the world’s population live in countries with tiny equity markets or no such markets at all.

As we detail in the 2019 Global Investment Returns Yearbook (an in-depth study that we produce annually in collaboration with Credit Suisse), over a period of almost 40 years, EM nations have almost doubled their share of world economic output (measured in purchasing power parity terms) from a quarter to almost half. Meanwhile, the proportion accounted for by DMs has fallen from just over 60% to 37%.

The relative importance of emerging vs developed economies is far from fully reflected in the size of their equity markets available to global investors. This is for a variety of reasons. In some EMs, local shares are inaccessible to overseas investors. In many EMs, the average “free float” – the proportion of a company’s shares available to buy and sell – is far lower than in DMs.

Nevertheless, even taking these factors into account, emerging and frontier markets have grown to a significant size: their combined weighting in global equity indices is now around 12% compared with a negligible 2% in 1980.

Strikingly, that growth took place in the years up to 2007: since then, the combined EM and FM share of the global whole has stagnated. Why? Mainly because the remarkably strong performance of US equities in subsequent years has outpaced the growth in EM markets: the US now accounts for more than half the value of equities worldwide.

Individual EMs have provided widely differing returns to global investors. So within the EM universe, which countries have done best? China is the most common focus of attention. That is hardly surprising. By the end of 2018, it accounted for more than 30% of the value of EMs as a whole, followed by Korea, Taiwan, India and Brazil.

Making very long-term comparisons is a process fraught with difficulties. In Russia, for example, investors lost everything following the 1917 revolution. The same was true of China when markets were closed in 1949 following the communist victory.

A long-term investor looking for real returns will gain little or nothing by trying to hedge currency exposure.

But it is possible to make robust comparisons over the past quarter-century, since the Chinese equity market reopened after many years of closure. What is striking is that despite its having achieved such a dominant position in the EM sphere, China’s performance from an international investor’s point of view has been middling.

There is a plethora of indices that yield vastly different figures for the performance of Chinese equities. But by our measure, which is to focus on all Chinese stocks legally available to global investors, the real dollar return from investing in China was 5.1% per year over the period from 1993 to 2018. That is only fractionally above the average for emerging markets as a whole, and slightly below the figure for developed markets.

The best performance was that of Brazil, which achieved annualised growth of 11%.

The Brazilian experience offers a useful insight. For more than two decades, 1974 to 1995, the inflation rate never fell below 20%, and in six of those years, it was close to or above 1000%.

Should figures such as these not worry an investor thinking of putting money into an emerging market? Brazil is an extreme example, but many other emerging markets have suffered high inflation.

In fact, history suggests that, over the long term, exchange rates movements largely reflect – and cancel out – the impact of inflation. Exposure to exchange rate fluctuations should therefore not dissuade investors from holding EM assets. A long-term investor looking for real returns will gain little or nothing by trying to hedge currency exposure.

To reduce risk, a more sensible strategy is to diversify across markets and currencies.

That outperformance has been maintained in the 21st century. Since the global financial crisis: real returns on US equities have been an annualised 10.6%; excluding the US, the world average has been 5.3%.

The 2019 Yearbook analyses the long-run performance of stocks, bonds, Treasury bills, inflation and currencies in 23 countries since 1900. It also measures the performance of today’s largest ten emerging markets over the longest period possible. Its publication comes after the worst year for returns from global equities since the Global Financial Crisis, with a decline during 2018 of 9%.

While 2018 was a poor year for equities almost everywhere, the first quarter of 2019 has seen a remarkable recovery. Of the 88 countries we monitor, 76 had negative dollar returns in 2018. Just 12 ended the year above break-even. And the best place to have had your money invested in equities? Zimbabwe. The return there in 2018 was more than 100%.

How about the long-term performance of EMs? We have constructed a 119-year index that measures US dollar returns, including reinvested dividends, for emerging market equities. We have also created a DM index calculated the same way. Over the entire period from 1900 to 2019, EMs achieved a lower return (7.2% per year) than DMs (8.2%). However, from 1950 to 2019, EMs achieved a higher return (11.7% per year) than DMs (10.5%). 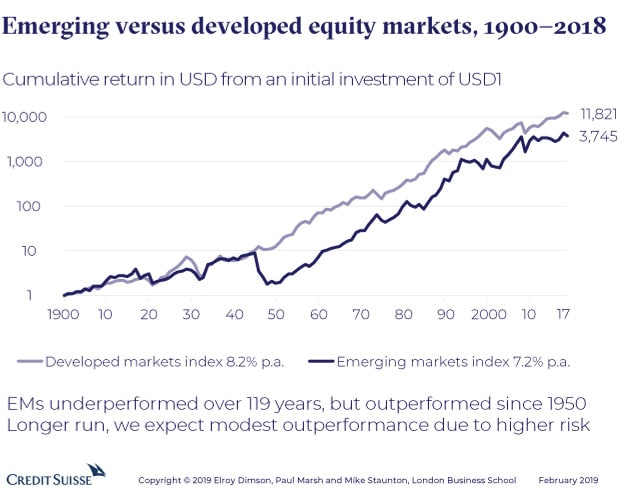 Looking to the future, emerging markets as a group have slightly above-average risk, and over the long haul we would therefore expect them to outperform by a small margin. We think most investors should have at least a modest exposure to emerging markets

Explore the latest techniques. Learn how to optimise your portfolio for maximum returns on our short course, led by world-class faculty.

I think that's a very optimistic view on emerging markets. What I also think is how the need of a stable coin, or in this case, cryptocurrencies will be key to helping out with the emerging markets and countries into establishing their economies. Even more interesting is the fact that people are stopping to use alternative methods to purchase cryptocurrencies like PayPal (https://insidebitcoins.com/buy-cryptocurrency/paypal), and focusing more into buying them directly from P2P sources.