Danger in the shadows

New research by Ralph Koijen of LBS identifies shadow insurance as a key area of risk.

Insurance. They very name sounds reassuring, conjuring up images of stability and security. Inside the apparently dull industry, however, there is vigorous debate about risk and regulation, systematic importance and capital requirements, a debate that will be key to determining the future shape of the industry.


In the wake of the financial crisis, regulators’ attention has been focused on banks, where there has been regulatory change in everything from capital requirements to governance. Insurers, by contrast, have attracted less attention.


The industry itself has undergone significant change over the last 20 years and risks are no longer confined to the traditional trio of interest rates, aggregate longevity and changes in policy holder behaviour, which companies are accustomed to managing. Factors such as the use of captive insurers, the growth in policies with guaranteed returns and the use of derivatives and hedging techniques have altered the industry’s risk profile and stimulated regulatory debate.


There has also been considerable debate over the extent to which the insurance industry represents a systemic risk. While the discussion continues, the Financial Stability Board has identified nine global systemically important insurers (G-SIIs), including US companies Met Life and Prudential Inc, Aviva and Prudential in the UK, Ping An in China and Axa in France. The International Association of Insurance Supervisors (IAIS) has now outlined higher capital requirements for this group, reflecting their greater importance to global financial stability.


The regulatory, economic and systemic risk of the insurance industry was the subject of a conference at London Business School, with contributions from industry executives, global regulators and academics. A survey is in progress as part of that debate and highlights the industry’s awareness of its increasing systemic risk and the need to upgrade its risk control mechanisms.


The conference will be followed by a book, co-edited by Ralph Koijen professor of finance at LBS and with contributions from all three areas, to be published in spring 2016. The aim, says Koijen, is to stimulate debate among academics, regulators, and the insurance industry about the industry’s activities, regulatory regime and risks.


Koijen identifies two key categories of risk: insurers have started selling a new range of products that offer guaranteed returns; and the industry has developed new tools to help them manage their capital more efficiently, including the use of derivatives, securities lending and the creation of captive companies. While the data for these issues comes largely from the US, because of the greater availability of information there, they are common to insurers across the world. While there are risks arising from securities lending and derivatives, Koijen identifies shadow insurance, through captives, and guaranteed products as the key areas for concern.

Why are shadows growing?


One of the most significant areas of increased risk was a by-product of regulatory changes: in 2000 and 2003, a new regulatory regime in the US, commonly refer red to as Regulation XXX/AXXX, required higher reserves against term and whole life insurance policies. This meant that companies were able to write fewer policies for a fixed amount of capital. These regulations did not, however, apply to reinsurers. Reinsurance has traditionally been used as a way of sharing risk across the industry and reinsurance companies are governed by a different set of accounting principles and need lower amounts of capital against their business. Companies affected by the new regime started moving policies to reinsurers, initially using unaffiliated, third party companies but then moving to establish their own captive, or shadow, reinsurers, encouraged by laws introduced in 26 US states allowing shadow companies.

The growth of these captive reinsurers has been rapid. Koijen and Yogo calculate that affiliated reinsurance grew from $90bn in 2002 to $617bn in 2013, with the amount going to shadow reinsurers rising from $11bn to $370bn over the same period. That is concentrated among the large insurers, with the top ten firms accounting for 90 per cent of the liabilities ceded to captives.

There is a lack of transparency about captives, making it impossible to judge their capital and solvency positions

Koijen says that other states have different rules, so the variation in the Iowa results may not be typical. He adds that captive insurers can also be useful for other activities, for example helping to make economic hedging easier to achieve. It is, however, impossible to judge without the transparency that full disclosure would bring. European insurers are also known to have captives in countries such as Luxembourg, Malta and Gibraltar. Again, however,  there is no disclosure so it is impossible to assess their extent or capital position.


A second new area of risk is in variable annuities, long-term savings products whose assets are invested in mutual funds. A shift from defined benefit pensions, where pension benefits are guaranteed, to defined contribution pension schemes, where the return varies with market returns, has encouraged insurers to offer products with a minimum rate of return on the underlying mutual funds. Demand for these products has risen steeply, with the market growing from $875bn in 2003 to $1,803trn ten years later. 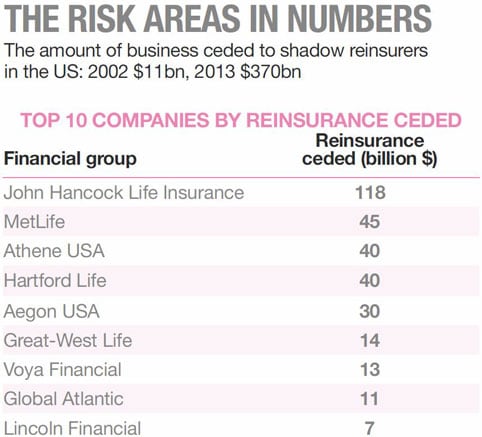 These products can be high risk. In the UK, Equitable Life collapsed because it could not afford to meet the guarantees it had offered, while companies offering variable annuities also suffered losses as a result of the rise in volatility, falling stock prices and interest rates in the aftermath of the financial crisis. Koijen and Yogo calculate that companies offering variable annuity guarantees suffered a 9 per cent loss in capital in 2008, compared with a 1 per cent gain for those companies without such guarantees. 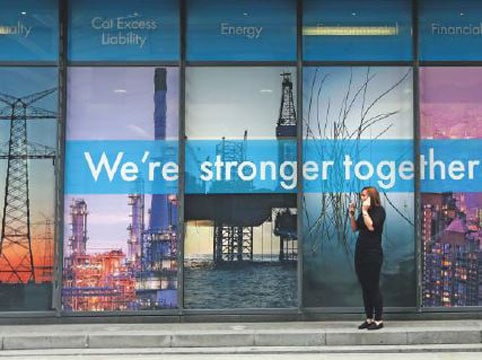 AIG, which once accounted  for $54bn of securities lending, suffered a post crisis loss amounting to 169 per cent of its capital and surplus in 2009.


Insurers are also increasingly linked to other parts of the financial system through activities such as securities lending, hedging using derivatives and financing arrangements. Many captive insurance companies will be funded through letters of credit from banks; letters that are generally short-term – typically extending for only a year or so – while the liabilities of the captives may extend for a decade or more. There are two potential risks: the bank withdraws its funding, perhaps following concern about the shadow company’s financial health, sparking a funding crisis at the insurer; or the bank fails to act ahead early enough when an insurer is in difficulties, resulting in a loss on the bank’s own balance sheet.


The experience of securities lending during the financial crisis suggests that it may be a further area of risk. Insurance companies will typically lend bonds in exchange for cash collateral, swapping back at a future date. The insurer will often reinvest the cash to earn a return, taking on liquidity, credit or interest rate risk in the process. Securities lending grew rapidly in the run up to the crisis, from $49bn in 2002 to $130bn in 2007, but fell sharply in its aftermath. AIG was one of the biggest in this market, accounting for $54bn of lending alone – and its losses in 2008 amounted to 169 per cent of its capital and surplus in 2009, while losses for other companies involved in this practice were also significant.


The debate over insurers’ position in the financial system continues. Research shows little consensus on whether the industry does pose a systemic risk. Greater disclosure of balance sheets and exposure of companies, including through their captives, would facilitate a judgement on this. “At least it is safe to say that insurance companies are large, that there are risks in the business and that there is a potential for risk mismatch,” says Koijen. “It is unclear that the insurance sector is systemic, but it is important to measure risk mismatch in the sector and to understand the potential amplification and transmission mechanisms.” 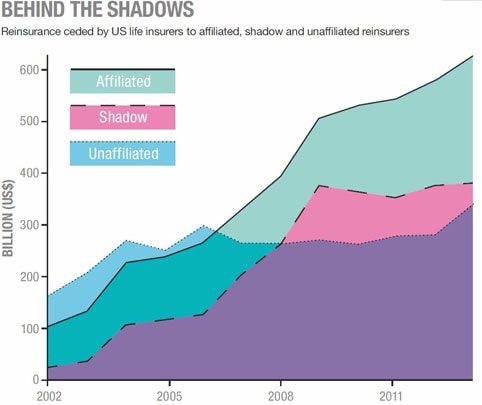 Shadow reinsurance has traditionally been used as a way or sharing risk. Companies are governed by a different set of accounting principles and need lower amounts of capital against their business.