Are you calling me a cheat?

Is there a difference between cheating and being a cheater? Can cheating ever be rationalised as ethical behaviour?

Gabrielle Adams
Organisational behaviour
Save to my profile

The latest research from Gabrielle Adams asks: Is there a difference between cheating and being a cheater? Can cheating ever be rationalised as ethical behaviour? 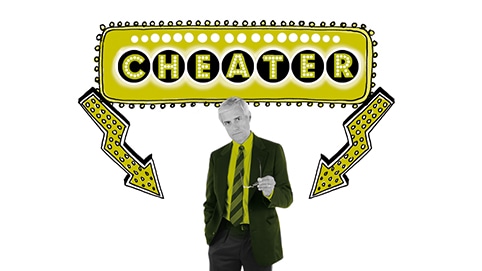 Who needs legislation and regulation to police ethical behaviour and deter corporate misdemeanours when you can deploy linguistics instead?

In keeping with the spirit of nudge theory, currently finding favour with a number of governments, Christopher Bryan from the University of California, Gabrielle Adams of London Business School, and Benoît Monin at Stanford University, investigated the effect of language on behaviour. In particular, they examined ethical decision making processes.


As the authors observe, people inclined to engage in unethical behaviour often rationalise their actions in a way that allows them to preserve their self-image as an ethical person, while enjoying the fruits of their unethical behaviour. They don't want to be seen as bad, so they distance themselves from their morally-suspect decisions. The person who inflates an insurance claim, for example, eases their conscience, telling themselves they have paid premiums for many years without a claim — so they are not really a thief.

But what if it was possible to take comparatively simple and inexpensive steps to prevent individuals from divorcing their actions from their self-image? The authors tested the theory that manipulating language might discourage people from making unethical decisions. To do this they ran a number of experiments focused on cheating. In one experiment, participants thought of a number between one and ten, and were rewarded with $5 for choosing an even number, but left empty handed if they picked an odd number. In another experiment, online participants flipped a coin ten times and were rewarded every time the coin landed heads up. So plenty of scope for cheating in both experiments.

In each experiment participants were divided into two groups and given instructions couched in slightly different language. One type of instructions linked cheating to the individual's identity – behaving in a certain way would make them a cheater. Phrases used included: “interested in how common cheaters are”, “determine the approximate number of cheaters”, and “please don’t be a cheater”.

The other type of instructions referred to cheating impersonally, as a behaviour. It used phrases such as “interested in how common cheating is”, “determine the approximate rate of cheating”, and “please don't cheat”.

In both cases, personalising cheating using the “don't be a cheater” approach eliminated cheating. Whereas, with the more impersonal approach, cheating still took place, despite direct appeals for individuals not to cheat.

Potentially the research has important implications for policymaking. It suggests some simple rephrasing can nudge people's behaviour in a socially desirable direction. Using language in personalised way may be more effective in curbing undesired behaviour, whether that is littering, speeding, or flouting financial regulations.

However, before everyone rushes out to rewrite the “do not... signs”, the paper offers a word of caution. There may be risks attached to using language that ties a behaviour to a person's identity.

As the authors note: “Because such wording signals that cheating as implications for identity, it is unclear what the effect might be on someone who is exposed to this treatment and then goes on to cheat anyway. Such a person might come to see being a “cheater” as part of his or her identity and be more likely to cheat in the future.”

In other words, with some individuals the manipulation of language may have the opposite effect, encouraging the very behaviour it was designed to prevent.

Maybe it is not time to abandon regulation and legislation, just yet.

This Executive Summary is distilled from “Cheating” vs. “Being a Cheater”. When Cheating Would Make You a Cheater: Implicating the Self Prevents Unethical Behaviour, forthcoming in the Journal of Experimental Psychology. By Christopher Bryan, Gabrielle Adams, and Benoît Monin.