A message to Garcia

Thomas L Brown explains how the obscure writings of a 19th-century author and philosopher shed important light on the state of ...

Tom Brown
Leadership
Save to my profile

Thomas L Brown explains how the obscure writings of a 19th-century author and philosopher shed important light on the state of management in the first decade of a new millennium. 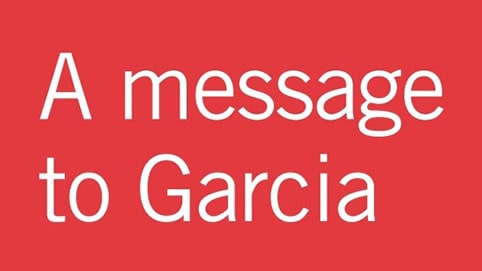 I first saw it in 1976. It was a small booklet, just a few inches wide and deep, the size that slips easily into a breast pocket. It was given to people like me who had a connection (no matter how loose) to the aerospace world. (At that time, I worked full time in management development for Honeywell Aerospace.) The pale-blue booklet, A Message To Garcia by Elbert Hubbard, was passed along to me with this imprint on the front cover: “Space Shuttle Main Engine Controller Program”.

The manager who had the idea of acquiring this booklet had a perverse sense of management history. The thoughts of Elbert Hubbard? Warmed up and re-served to managers and workers in 1976? For people involved in launching the Space Shuttle?

I wondered who exactly ordered thousands of copies of an almost 100-year-old pamphlet. Who in the world signed off on this corporate requisition?

“Life is just one damned thing after another” Hubbard lived from 1856-1915. When writing, he also liked to use the Latin name Fra Elbertus. With his roots in Bloomington, Illinois, from a family of modest means, he deferred his dreams of being a writer and became a businessman instead, selling }soap for a relative’s manufacturing business. He sold his interest in this hugely prosperous venture in 1893.

Hubbard was the genesis for the Roycrofters, a type of artisans’ community near Buffalo in New York State; this idea presumably came to Hubbard after he met William Morris, the icon of the English Arts and Crafts movement. At the age of 40, he enrolled in college, quitting after a year. He died when the Lusitania was torpedoed; his body was never found. But as a writer, he lives on; he was eminently quotable:

Genius may have its limitations, but stupidity is not thus handicapped.

These witticisms were penned years before Peter Drucker shook hands with his first editor. And Hubbard’s name still brings up some 40,000 hits on Google. Not bad for a business philosopher whose main life contribution remains, for many of us, A Message To Garcia.