Economics UK/Europe
Save to my profile

Economists ask: should an independent Scotland have its own stock exchange? 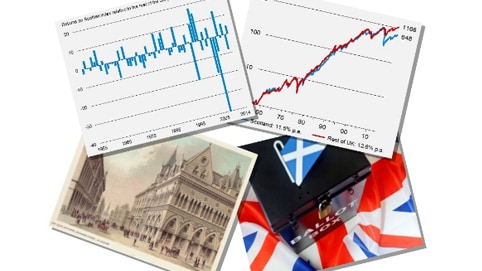 The debate about an independent Scotland’s economic future is today fuelled by stock market researchers who have created a standalone index of Scottish securities – the Scotsie 100.

Identifying 100 purely Scottish stocks currently listed in London, Paul Marsh of London Business School and Scott Evans of Walbrook Economics compare the Scotsie 100 with a parallel ‘Rest of the UK’ index over the last 60 years. They found that £1 invested in the Scotsie 100 in 1955 would have grown to £648 today (with dividends reinvested), a 5.7% increase in real (inflation-adjusted) terms. However, £1 invested in the rest of the UK would have grown to £1,168, a 6.8% increase.

The research was driven by the question: what if an independent Scotland follows other newly-independent countries and sets up its own stock exchange?

“We have examined the implications of a ‘yes’ vote for Scottish companies and investors, including issues of currency, taxation, EU membership, and regulation,” Marsh explains. “The fact that the terms of any separation from the UK have not been pre-negotiated is generating considerable uncertainty.”

“We believe that investors in Scotsie 100 stocks should not be unduly concerned, nor should they be making contingency plans to rebalance their portfolios,” says Evans.

“To some extent, they are protected by the fact that both companies and individuals can re-domicile if necessary. There would also be a period of at least eighteen months during which the terms of separation are negotiated. They can afford to wait and see.”

The key findings in The Scotsie 100: Sixty years of Scottish stocks are:

Comparing Scotland to other countries with similarly dominant banking sectors, such as Iceland, Cyprus, Greece and Ireland, suggested there were benefits to being part of the UK when the financial crisis hit.

“The near-collapse and subsequent rescue of RBS and HBOS imposed heavy costs on taxpayers,” argue the authors. “The burden was spread across the UK rather than falling entirely on Scotland. The citizens of those other countries enjoyed no such co-insurance, and suffered accordingly.”