The sun’s out, but trust’s in - Primrose Solar

Primrose Solar has gone from a startup to one of the UK’s largest solar farm operators in less than two years. Two of its executives explain how they manage the risk of an uncertain business environment, the value of building a solid reputation based on trust and how studying at London Business School gave them the confidence to run their own venture. 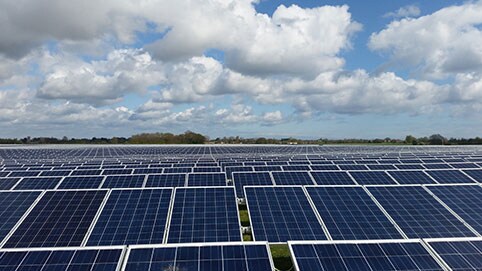 Safeguarding investors’ capital is a must for most businesses and Primrose Solar is no exception.  But unlike other companies, one of the UK’s biggest solar farm operators has to manage relationships with multiple stakeholders with different agendas, including landowners, grid operators, communities and regulators.  Primrose Solar seeks to operate in a way that is sustainable and which promotes biodiversity and to develop a trusted reputation.

That task falls to CEO Giles Clark and COO Nicola Waters, London Business School alumni who studied Executive MBAs in 2004 and 2014 respectively. Giles is an experienced solar executive who worked with Pioneer Point Partners (a specialist private equity investor) and York Capital Management (a global investment manager) to set up Primrose Solar at the end of 2013.

Primrose builds, owns and operates large ground mounted solar farms in the UK. An average solar farm covers 50-100 acres of land and generates enough electricity to power 5,000+ homes. Primrose has 10 large solar farms in operation, representing 184 MW of generating capacity, less than 18 months after the business was started. Its initial portfolio of sites generates enough clean energy to power 50,000 typical homes and it continues to grow through acquiring and constructing additional sites.

2013 was the ideal time to launch a large solar farm operator in the UK. The UK introduced a feed-in tariff to support solar in 2010, for the first time, but this was slashed a year later in response to over-demand.  By 2013, the utility scale solar industry in the UK was at the start of a phase of more sustained growth under the Renewable Obligation Certificates (ROC), the same subsidy that supports onshore and offshore wind development.

Solar farms are economically viable because the government provides support in the form of ROCs, which are index linked, provide income for twenty years and are very dependable. However, the business faces uncertainty around the future level of regulatory support. Volatility surrounds the pricing of construction contracts, power prices and the availability of new projects for expansion, makes it a risky business.

Primrose Solar takes a distinctively lean approach to the construction and operation of its portfolio of sites. The core team consists of only 12 people.  Both Giles and Nicola are experienced solar executives, and they have chosen to hire and train relatively junior staff, to develop a team with strong core values and high expertise.  For Primrose, lean and focussed operations are a conscious strategic choice for a business operating in an uncertain market, enabling nimble decision making and keeping overheads to a minimum.

The Primrose team is small and hardworking, but how does it attract the right people? “It has been difficult to attract talent in such an uncertain industry,” explains Nicola, adding that the solar market is risky as it faces an unpredictable regulatory environment.  “I enjoy the risk, but a ‘normal’ person doesn’t.”

Primrose has chosen to hire people who have the right skills and attitude, but who aren’t industry veterans.  Giving younger, less experienced team members an opportunity to see the value of their work, is one of the company’s major draws. The business also offers training and “great opportunities”, according to Waters, who at just 29, is Primrose’s COO. “I don’t think someone with more experience would have done anywhere near as good of a job as Nicola,” Giles says. He adds that the company’s CFO has also only just turned 30.

Providing renewable energy to UK homes is just one facet of the business. Primrose is also a socially responsible company that combats global warming, encourages biodiversity, offers educational visits to local schools and supports land owners. “Helping to combat global warming is important to us, and our challenge is to do this in a way that is also commercially effective”, Giles says. Distributed generation means that local communities get to use the energy generated.

As much as “standing in a field beats staring at a spreadsheet”, the business duo keep financials at their core. Delivering returns is fundamental but Giles and Nicola also strive to develop Primrose’s reputation as a socially and environmentally responsible business.

Giles explains: “Making money in a socially constructive way is a balancing act.” Engagement in ‘good’ in turn builds the company’s reputation. Waters says: “It’s cyclical; engaging in biodiversity and offering help to the landlords helps people bring new projects to us, and allows us to make money for our investors.” Primrose typically takes low grade grazing land, rather than prime arable fields, and pays the landowner an enhanced rent for 20+ years of commercial operation.  This injection of new money can transform the fortunes of farming families. Primrose works with the landowners to help with stewardship of the land for the solar park’s 25-year lifetime. The land also remains in agricultural usage, for example sheep are able to graze between the panels while wildflowers and birds are encouraged to live there.

“We trust each other,” says Giles about the company’s team of 12. He and Nicola had previously worked together, on the board of a rooftop solar installer called EvoEnergy. Fate seemingly brought them back together, with Waters spotting the Primrose job on the School’s job board at “the perfect time”. Ever the strategist, Giles says: “I had put it on there, knowing that Nicola would see it.” The duo understand each other’s backgrounds, capabilities and knowledge, which instils much-needed trust in the executive team.

“People like and trust us,” says Nicola, who manages the company’s projects and people on daily basis. As a land steward, the business works closely with local communities where the solar parks are located. Trust is key in achieving land owner buy-in. “It’s a generational thing; whoever you sign the 25-year lease with, you’ll deal with one of their children in 20 years’ time,” Giles says. “Landowners send us pictures of their kids and the new tractors that they have bought,” Waters adds to explain the depth of that trust.

“Having the MBA gave me a stamp of credibility,” Nicola says. She explains that without it, hiring her, as a 29-year-old, would have drawn opposition from investors. Although they have different skillsets, Giles and Nicola agree that the confidence they gained while at the School has had a major impact on their careers. “Being able to sit in a room with investors and understand the financials has been the most valuable thing,” says Waters “making me more confident and better at my job”.

The School’s network has also been key. “We have used people, who I met through London Business School, as consultants to Primrose.” Similarly, Giles turned to one of his classmates early on to help with the start-up in an advisory capacity.

Having successfully launched the business, Giles and his team are now focusing on finding new projects to keep delivering for their investors. The aim is achievable, providing the company navigates the changing market place and secures more projects. Now is the time to make hay while the sun shines.