How three men with no experience of raising a child nurtured their business, MORI, into a healthy, growing venture. 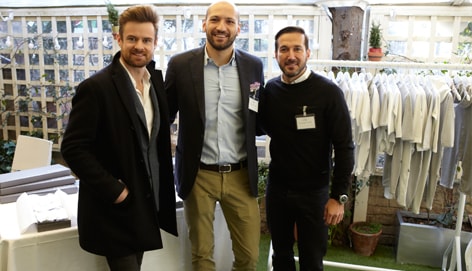 If the trio behind MORI had paid heed to the phrase ‘stick to what you know’, they’d never have launched an online baby clothes subscription service in March 2015. Cameron Miller MBA2012, a London Business School alumnus, and his business partners Akin Onal and John Charles Gasser haven’t experienced fatherhood, but being uncles and godfathers has exposed them to the frustration of trying to find good quality clothing when buying gifts for loved ones’ babies.

Their shared experience helped give birth to MORI, a web-based venture that produces and sells high quality gender-neutral cotton and bamboo baby essentials such as body suits, hats, towels and bibs. The company has two primary sales channels: an e-commerce store for people to shop or buy baby gifts, and a subscription service, where new parents receive a MORI parcel with baby clothes and garments every six weeks during the early stages of the child’s growth.

“People provide the baby’s due or birth date when signing up for MORI’s subscription service,” Miller says, “so we know the child’s clothing size and whether they’ll need winter or summer garments depending on what time of year they’re born.

The struggle to buy good quality clothing and garments for friends and relatives’ babies wasn’t their only motivation, with the trio taking inspiration from the Baby Box initiative in Finland. Since 1938, Finnish parents have received baby garments from the government for the early years of their child’s development. Miller and his partners discovered this when British royals Prince William and the Duchess of Cambridge, Kate Middleton received a Baby Box from the Finnish Government for their new-born son, Prince George, in July 2013.

“For 75 years, the Finnish Government has given new parents a Baby Box that includes a mattress and essential clothing for the child’s first year,” says Miller. “It’s to give every baby an equal start in life. We looked at similar offerings here when Prince George received a Baby Box and realised there wasn’t much available, so our product was partly inspired by the Finnish.”

Following the royal birth, Miller and his partners spent more than two years researching the market, speaking to mothers and industry experts and attending pregnancy courses to develop their range of products. They then set up MORI – which comes from the Japanese word forest and is the inspiration for using natural fibres to make the company’s Japanese/Scandinavian style garments – in 2015. By that point, Miller and Onal had quit their roles at JP Morgan, where they met as interns a few years previously, to pursue their dreams of becoming entrepreneurs.

Quitting a well-paid job and relinquishing his financial security to launch MORI was a big decision for Miller. But missing his opportunity to become an entrepreneur was never an option. “It’s a financial risk, but not doing something like this and missing that chance to get what you want out of life is a far greater risk,” he says. “If MORI is to be successful, we need to spend a year or two with a limited salary while we build the business.”

Having taken the plunge, one of the main priorities for Miller and his co-founders was finding somewhere to manufacture the baby garments. Onal, who’s originally from Turkey, forged ties with manufacturers in his homeland that produce the garments and send them by road and airfreight to MORI’s office in west London. They are then distributed to Baby Box subscribers and website customers around the world.

“Our idea, popularised by many e-commerce brands in the last few years, is to cut out the wholesalers and work directly with manufacturers,” Miller says. “That means we can sell quality products at better prices than traditional retail brands that rely on brick-and-mortar outlets for distribution. We’re also focusing on the design and quality of our garments, rather than just making them fashionable, which gives them a longer shelf life.”

Getting the business acumen and support needed to help nurture the founders’ concept into a fully-fledged venture was also critical in the early stages. That support came from the LBS Incubator Programme, which was set up by Deloitte Institute of Innovation and Entrepreneurship to give LBS alumni with entrepreneurial ambitions the advice and expertise needed to turn their vision into reality. Miller applied in 2014 after receiving an email about the programme and gained one of 11 places, despite facing strong competition from 29 other applicants.

Since joining the programme in September 2014, Miller and his partners have enjoyed several benefits. “It’s provided us with office space, accounting support from Deloitte, access to faculty with exceptional business knowledge and opportunities to meet investors at networking events,” Miller says. “The school is positioning itself to be a leader of the entrepreneurial community here in London, which is great for companies like ours.”

Sounding out other entrepreneurs

Sharing best practice and advice with the other entrepreneurs on the incubator programme is another major benefit, as Miller found when he met fellow LBS alumni David Saenz, Christopher Steinau and Dan Ziv. The trio, who met on the MBA, created Uncover, an app for making last-minute bookings at some of London’s most upmarket restaurants. The concept has proved hugely successful since its launch in January 2015, with Uncover securing £1 million in seed capital funding and named Best New App three times by Apple’s app store.

Saenz, Steinau and Ziv put Miller in touch with the co-founder of Cornerstone, a UK-based shaving supplies subscription company, who offered advice on how to develop MORI and recommended using a PR expert to promote the business. Since then, marketing and word of mouth have helped raise MORI’s profile; the business has attracted customers in the UK and abroad and sparked interest among investors.

Having raised capital through the Seed Enterprise Investment Scheme – a tax-efficient initiative for investors to back small ventures in the UK – MORI’s founders are now in talks to secure second-round funding. If successful, the capital will be used to develop new garments in a range of colours and sizes. Other plans include moving from west to east London to a new office in Bethnal Green and increasing the team to eight by appointing sales staff and interns.

Talks between MORI’s founders and potential investors are ongoing, with Miller reticent to discuss details. But he is more open to discussing the idea of him and his partners becoming parents themselves at some point.

“I think we’re all more broody than we were before launching the company; MORI has certainly got me more in the mindset of being a parent,” Miller admits. “People say, ‘You haven’t been a parent’ but not having that experience has taught us that everyone has different ideas about parenting and the culture around that. Having that detachment from parenthood has been quite helpful for the business, but in terms of being a parent in future, I certainly understand more about what’s involved.”

While they haven’t experienced the reality of parenting, MORI’s founders know what it takes to nurture something close to their heart, with the business growing quickly after finding its feet – something any parent would be proud of.