Financial confidence on the up

Robert Zünd MiFFT1995, who works in the treasury team at the Swiss bank Zürcher Kantonalbank, journey’s back two decades and reflects on his London Business School (LBS) experience 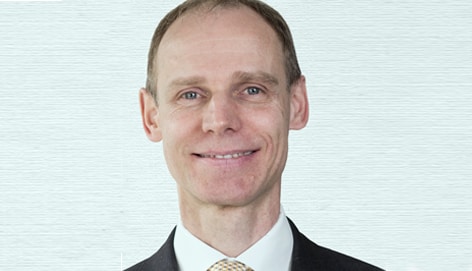 There have been several landmark years in London Business School’s (LBS) recent history, and 1994 was one of them. It was then that LBS launched its first ever full-time Masters in Finance (MiF) programme – which today is consistently ranked number one in the world – the catalyst for shifting focus from organisational behaviour and operations management to derivatives and corporate finance.

LBS was born from the notion that management needed to be professionalised in the same way as lawyers and accountants, to help Britain’s economic performance. Following the same vein, in the 1990s the School joined a national effort to make finance more credible.

Robert Zünd, who today works in a treasury team at the Swiss bank Zürcher Kantonalbank, is one of many people to benefit from the School’s pure finance programmes. Zünd’s decision to enrol on the first full-time MiF in 1994 was driven by a desire to develop his financial knowledge.

“In Switzerland in the mid-1980s you couldn’t study finance; it was unheard of,” he says. “I was working in the bank in the early 1990s, and the technical knowledge needed to understand derivatives, valuation and risk calculations was suddenly required. I realised I was a little behind my peers in the US who had already been exposed to technical subjects like these, so I decided to find somewhere to study.

“Of course, 20 years ago, the market offering was limited,” he adds. In fact, Zünd searched for an institution globally, but it was only after spotting an advert in Swiss newspaper Neue Zürcher Zeitung, that he gained his first glimpse of the School’s MiF. “Once I saw the advert I knew immediately – this is it! I went to the roadshow and applied to LBS. For me, it was just the right thing to do at the right time; I consider myself lucky to have studied on the programme when I did.”


Today, almost 3,700 pure-finance students from 111 countries have passed through LBS’s gates, which is a source of pride for the students, alumni and world-class faculty alike. Andrew Scott, Professor of Economics at LBS, gives his take on the rise of  MiF: “Over the years, we have nearly doubled in size (as an institution), maintaining our enduring commitment to quality and achieving global recognition through rankings, corporate recruiters, faculty research and impact, and thought leadership, despite our youth and relatively small size.

“There’s much to be proud of, and that’s due to a constant contribution and commitment to the School. Our strong faculty, excellent location and top ranking keep the programme’s reputation and validity strong.”

For Zünd, the School’s faculty was one of the biggest highlights from his time on the programme. “I really liked the classes led by Stephen Schaefer (Professor of Finance at LBS). I still remember the fixed income subjects he taught, even today,” he says. The lessons learned 20 years ago are invaluable for Zünd’s treasury management role, where he works with loans and deposits in a fixed income function.

Four years ago, Professor Schaefer visited Zurich and revealed key research on the financial crisis to a group of alumni including Zünd. It showcased to him and his peers that “faculty stay on top of topical research”. As competition from other institutions has grown over the years, he says the LBS faculty continues to impress alumni by staying ahead of the curve.

Zünd believes in the School’s faculty, but also in its long-lasting reputation, which is why he volunteers as a brand ambassador at information sessions for prospective LBS students. “The sessions are valuable. Candidates appreciate speaking to alumni to see how MiF really works, what their chances in the market are afterwards, and to hear the story of the individual.”

Despite always working in finance, Zünd has been exposed to several functions within the finance industry throughout his career. Before joining Zürcher Kantonalbank he held business management, IT, project management and senior analyst roles. He adds: “It was the MiF that helped me to achieve change and helped me into my job now.”

Zünd has been in the treasury department for five years, but says MiF has given him the confidence to look ahead to new opportunities – be that entrepreneurial pursuits or another financial function. “People say it’s difficult to make another career move later in life. But I’m not worried. I have a good background with MiF and I can bring lots to the table,” he says.


The original MiFFT1995s have seen some milestone financial events, such as the global financial crisis, regulation shake-ups and the tensions in Greece. But in that time; they have stayed in touch with each other and, wherever possible, talked through new opportunities, such as start-ups, new roles and changing locations.

The former classmates gathered in May 2015 for their official LBS reunion in London, the first time some of them had reunited since studying at LBS. Yet Zünd says it felt like only yesterday since they last saw each other. Before the event, Zünd spent time reconnecting with old friends online to encourage them to travel from many locations such as Japan, the US and Europe to London. He says: “In the end, we even had classmates from Egypt and Mexico on the day, and it was great.”

With memories fresh from the reunion, Zünd recalls a story of commitment and intensity from his days at LBS: “I remember working with my break-out study group. Our classmate’s girlfriend at the time was flying in from abroad, and back then we had no mobile phones. She arrived, as planned, at the airport and obviously hoped to see her boyfriend – but he didn’t show up.”

According to Zünd, his classmate was too busy studying back on campus to go to the airport. The anecdote showcases the all-consuming learning environment that current students experience today.

Zünd’s personal MiF 20th anniversary tale is one of perfect timing, with the launch of the programme at the right point in his career. As he looks forward to the future, he’s equipped with the credibility, friends and confidence to pen the rest of his story.