It’s all about the long-view for Oliver Russell, as he explains how he’s diversified an ancient family estate to create a sustainable business model for the future. 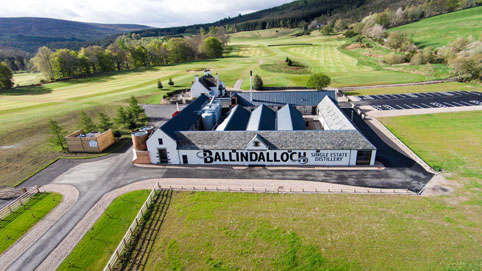 There aren’t many entrepreneurs who have to wait eight years for their product to be ready for market.

But in the whisky industry, patience is not only a virtue, it’s a necessity.

Luckily, long-term goals are second nature to Oliver Russell SLN04(1973), who after marrying Clare Macpherson-Grant, joined her in the running of Ballindalloch Castle and its estate, Clare’s ancestral home in the Scottish highlands. Clare inherited the estate when her father, Sir Ewan Macpherson-Grant, died in 1983. Long-term strategy is part and parcel of adapting the ancient family estate for the demands of modern life, creating a sustainable future for their children and future generations of the family.
“Whisky is one of the spirits which takes the longest to mature,” says Oliver. “But then everything up here is long-term, so it fits with it well."

Along with the estate’s traditional activities of farming, fishing, stalking and shooting, Oliver and Clare have worked to diversify into new areas, introducing a windfarm, a golf course and now the new whisky distillery – Scotland’s first single-estate distillery. The new venture was opened officially by The Prince of Wales and the Duchess of Cornwall – or the Duke and Duchess of Rothesay as Charles and Camilla are known in Scotland – in April 2015.

Succession of a family business is often fraught with challenges as a new generation seeks to take a business forward, but Oliver and Clare had already mapped out plans for the estate by the time they took it over. Oliver’s background in finance was bolstered when he undertook London Business School’s Sloan programme in 1972 which expanded his strategic outlook. Their strategy looked to move reliance away from landowning and towards alternative uses for the estate that would generate a sustainable income.

“We married in 1967,” says Oliver, “I left the city in 1978 and we moved up there the following year. I had a very useful introduction to the estate going around with my father-in-law. We took it on fairly soon after that. We had spent a lot of time there during school holidays and had already mapped out some of our plans.”

By opening the home up to the public, the estate matched criteria for exemption from the levels of inheritance tax that apply to private houses – a welcome bonus. But it also marked the beginning of tourism at Ballindalloch, a new industry for the estate, which now provides a thriving income.

This new strand to the estate’s strategy sat alongside the development of more traditional activities; although much of the land was farmed by tenant farmers, as leases expired and older tenants passed away, instead of seeking new tenants, Oliver and Clare took the land in hand to farm themselves. The land is used for growing crops, including the barley which makes the estate whisky. The Macpherson-Grants are not the only ancient family with ties to the land – it is also home to the oldest herd of pedigree Aberdeen Angus cattle in the world. These traditional industries feed into something that previous generations might have baulked at, but which Oliver says is crucial to the estate’s future business success; they are all part of the Ballindalloch brand.

“We are building a brand,” says Oliver. “We didn’t realise that was what we were doing at first.”

“Our brand identity lies with the way that it has evolved without compromising quality. The estate has been in the family for nearly 500 years, which allows us to be authentic and not rely on any gimmicks.

“Whether you visit the Castle as a tourist, or enjoy a corporate day at the distillery or golf course, we maintain the highest standards you would expect from a family-run estate. It is very rare to find such a range of activities, all in one place. From the more traditional sporting options to the more diverse elements such as a wind farm, we endeavour to meet the needs of the future, while never forgetting our past.”

The right team for the job

The new distillery mixes local heritage industry with modernity, building a business future without compromising the historic identity of the land. Although small scale, it has its own distinction as Scotland’s first single-estate distillery – meaning all the ingredients come from the estate and are mainly processed on site, from barley to barrel. The all-important water comes from six springs on the land, the barley is grown on the estate – and even the spent-grains from the mash tun go back to the estate in the form of cattle feed. The liquid bi-product is used as fertiliser.

Astonishingly, it wasn’t a hobby-turned-profession for Oliver when he decided to go ahead with the distillery. He admits he had no experience of the whisky trade when he started out. Instead, the idea came from the need to regenerate a tumbledown outbuilding on the estate.

“The roof was falling off, it was near the road and quite frankly, it was an embarrassment,” he says.

“A bulldozer was the alternative.”

Fortunately for whisky fans, the bulldozer was put aside and the distillery idea went forward. The lack of personal knowledge of the industry wasn’t a concern for Oliver, who lays the praise for the success so far at the door of his carefully selected and recruited team – which includes both of his sons, Guy and Edward, and Master Distiller Charlie Smith. Smith was coaxed out of retirement to join the project after 40 years distilling for brands including Talisker, Cardhu and Glenkinchie.

“Charlie’s done a wonderful job,” says Oliver. “He joined us when we were doing the building. It was absolutely crucial to choose the right person, and he knew exactly what it was we wanted to develop.”

Equally as crucial as the team tasked with setting up and running the distillery was the equipment itself, and expertise came in the shape of one of Ballindalloch’s regular visitors and golfers, Richard Forsyth. Forsyth’s family company specialises in creating the large, copper stills required for the process.

Looking to the future

It may require patience – the spirit must mature for at least three years before it can be classified as whisky, and the Ballindalloch batch will mature for eight before being bottled – but that fits the nature of all Oliver and Clare’s planning. They are not looking to turn a quick profit, but to create a business that outlives them and will provide for future generations. In the meantime, they are running distillery tours, with tastings from the family’s well-stocked private whisky cellars.

“I think we have to be dedicated to the business in different ways,” says Oliver. “We can be flexible – we are a limited liability partnership, as long as there’s someone in the family who remains interested in it to make sure that the right people are involved then there can be some flexibility.

“We will have to look to distribution further down the line, but we won’t be bottling for eight years.”

For now, the estate looks to be in safe hands. Oliver and Clare already share the running of it with their eldest son Guy. The diverse strands of business sit alongside the traditional industry of the estate, without compromising its distinct identity. And in eight years’ time, there may be a new name in the whisky business.

To find out more about the distillery, tours, or private cask purchases, please contact Brian Robinson, the Distillery Host.