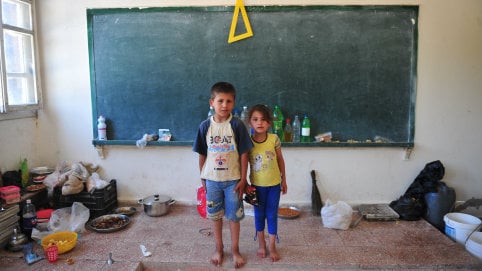 Anna's voice breaks slightly as she remembers the photograph she saw in 2013 that led to her eventually quitting her prestigious job at Barclays Capital to go and work for the charity Syria Relief. The picture was of three children in a refugee camp. “There was this little girl, who must have been just about five or six, carrying her baby sister and leading another by the hand. It really hit me. My own daughters were quite young at that time and I put myself in that situation, imagining what it would be like if my daughters were on their own, in a war zone. The heart-breaking sadness I felt made me think I really wanted to do something.”

Most of us would probably have donated some money at that point, but Anna went several steps further. “I wanted to see if there was something real and tangible I could do.” After some research she contacted an organisation helping refugees in the north of the country and within weeks was on her way to Syria, via Turkey, with 60kg of clothing that she had collected. Three years later, Anna heads the London office of Syria Relief.

Anna graduated in finance at Bocconi University in Milan in 2000 and worked in private equity before moving to London in 2004 to study for a Masters in Finance at LBS. She describes being amazed by the diversity of the students. “LBS was excellent academically, it gave me the foundation for my next job – but, more than that, to have the opportunity to listen to personal stories from all around the world was so valuable. Coming from Italy, it was really the first encounter I’d had with a multicultural society. I made some very good friends and I loved the flexible, dynamic environment. I felt like I was in the centre of where things happen.”

After LBS Anna took at a job in leverage finance at Landsbanki. “I was involved in the big boom, the growth of the bank – we did a lot of interesting deals, funding wasn’t an issue at that time and the atmosphere was very exciting.” Then came the crash, in 2008, and the bank went bust. The London office went from 500+ people to 80 and Anna was asked to stay on to restructure most of the bank’s loans to ultimately recover money for the creditors. From there she became Vice President, Restructuring, at Barclays. “It was something I liked,” she says, “because, in agreeing good exit deals, we were ultimately trying to do something good for the bank, good for the business and good for people.”

Then she started to get involved in Syria. On that first trip, she spent two days at Bab Al Salam, a refugee camp inside Syria “doing really basic things” – distributing food and clothes and playing with refugee children. “It was the trip that completely changed my life. From that point I started to raise money in London through photo exhibitions, dinners, coffee mornings and run small projects in the camp… I was doing it privately, there were no costs, so people knew any money they gave me would go straight to the people who needed it.”

For the next two years she went over to Syria every two or three months – leaving London Stansted on a Friday night, flying through the night, spending Saturday and Sunday at the camp and then going into work on Monday. In the summer of 2013 she met a Syria Relief team inside Syria and they took her into Aleppo, which was under heavy bombardment. “It was a very intense experience, a situation where you really have to fully trust the people you are with” Her Syrian friends told her, “‘Why don’t you get in touch with this organisation? We collaborate with them, they work really well.’ So I phoned up and told them what I was doing. I introduced my contacts to them, set up more events.”

Then Syria closed the borders to foreigners, making further trips impossible. In November 2015 Anna found herself thinking, “What do I want to do now – do I want to stay in banking? I’ve done a good number of things in finance, what do I want to do for the next 20 years of my life?” Finally she left Barclays and formally joined Syria Relief in March. Her focus is on building capacity in London (the charity is headquartered in Manchester, with another two offices in in Turkey and six inside Syria) as well as dealing with major donors and forging new corporate partnerships.

Syria Relief was founded in 2011, just after the beginning of the uprising in Syria, by a group of Syrian expats – five doctors and two businesspeople – who had been living in the UK for many years. Initially the focus was on their own families and friends still living inside Syria: they all thought they’d raise £100,000 and the conflict would soon be over. Five years on, the war is still raging and the organisation is now the largest UK-registered charity entirely focused on Syria with 300% growth experienced between 2013 to 2014.

Anna likens it to a start-up that’s suddenly grown into a larger organisation requiring proper structure and procedures. The first step taken by the organisation was the appointment of a new CEO. A Group CFO was also appointed few months ago to take control of the finance team. “When you start managing large donations, you have to report to the donors in a professional way, and you have to be sure that foundations are solid,” Anna explains.

“After many years in restructuring I am quite good at preventing things going wrong and, thanks to my skills – which are different from the rest of the team – I can help to see situations from a different angle.

“Through my contacts we’ve been instructing law firms to review internal policy and procedures completely pro-bono, and a risk assessment will be conducted shortly. We had a very good review by the Charities Commission and we have had good meetings with two large financial institutions in the last two weeks – we are going through due diligence at the moment.”

There’s a strong troubleshooting component to her role. “Unfortunately there are a lot of mistakes that can be made in completely good faith, and we work in such a sensitive area that if something went wrong, it could go massively wrong. If we lost reputation it would be terrible. Most of our funds come from big international NGOs, who give us money to implement specific projects inside Syria; it is our duty to report to them in the most satisfactory and transparent way.”

Syria Relief is also very proud to be able to keep costs to the very minimum:. “Our admin fees are really low, between 7% and 10%, and we put budgets together line by line. Each of the 55 schools we run inside Syria has a detailed budget indicating the exact number of staff, monthly salary, stationery, energy and running costs.”

Anna stresses that she wouldn’t work for just any charity. She had to know that her skills could be applied to this reality and make a difference. “Otherwise there would be no point in me coming in. I was extremely privileged to have the education that I had. It was time to think, now what can I do for someone else?”

Tickets are on sale now for a London event at The Shard on September 22, 2016, raising funds for Syria Relief’s #StepForward project that supports prosthetic limbs clinics in Syria. Visit www.syriarelief.org.uk/step-forward/ for details. Anna Farina: a.farina@syriarelief.org.uk.