A friend in the crowd 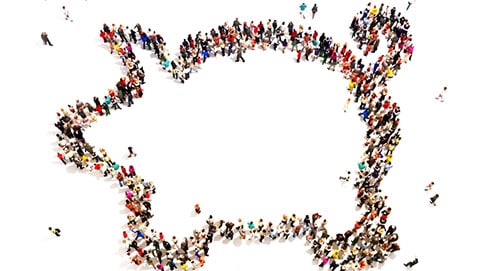 Go to crowdbnk.com and you can browse through an array of businesses looking for investors to help with their growth plans. It might be an English vineyard producing sparking wines or a company making automated suturing devices to close wounds faster. The facts and figures are there online, you just choose if you want to invest or not.

In 2014 CrowdBnk raised £7.4 million for 14 different ventures. And halfway through 2015 it had already raised another £10 million for 13 more companies.


Get cash or go bust


The company’s filling a gap in the financing market that founder Ayan Mitra SEMBA2010 first identified in 2007 when he was a consultant helping raise money for technology start-ups. “These guys had a lot of traction and they were growing really fast,” he says, “but they almost went out of business as the traditional route to getting finance took so long and was so inefficient. So that played heavily on my mind.”

That finance gap was further squeezed by the financial crisis of 2008 when banks stopped lending and smaller companies were left with nowhere to turn to.


It was in 2009 when Mitra was on an MBA exchange at New York University that he heard about the launch of Kickstarter and he started connecting the dots. “I thought there was a massive need for a regulated digital investing platform that matches good growth businesses with investors who want to back them. There wasn’t anything like it at the time and crowdfunding, as we now know it, wasn’t the flavour of the day.”

CrowdBnk’s focus is on businesses looking for growth capital of between £100,000 and £5 million. It rules out ventures under £100,000 as too risky, while businesses wanting over £5 million are well served by existing finance. But the bracket in the middle has traditionally been at the whim of boutique investment houses and corporate finance companies. It’s an underserved market and was identified as a gap in two UK government reports of 2009 and 2011.


The best of investing

CrowdBnk’s goal is to combine the promise of new technology with tried and tested investment practices to give people access to properly vetted, correctly structured and correctly priced investment opportunities. General crowdfunding platforms tend to believe that the crowd can decide and no one needs to get involved in the middle with structuring and pricing. But Mitra believes there’s a role for an intermediary. “Every crowdfunding platform doing regulated products has to ensure that everything said is fair and not misleading, but we think you have to do more than that – you have to make sure that any risk is highlighted and priced accordingly so that the valuation of the company is appropriate, the bond that you are promoting has an appropriate coupon rate, and it’s clear whether it’s backed by assets or not.” Another key difference is that CrowdBnk wants “to show alignment” with its offerings – it puts its own money into every deal funding between 2 and 10 per cent of each round.


Mitra says he’s drawn on London Business School resources to “help and guide” him. He singles out Jeff Skinner, Executive Director of the Deloitte Institute of Innovation and Entrepreneurship, along with John Bates, Fellow in Strategy and Entrepreneurship, and Professor Eli Talmor, for the advice and feedback they’ve given. And he says he’s made full use of the School’s network: “Our first investor was an LBS alum. The first three people we hired were LBS students. There’s a large overlap between the people we hire, people we raise money for and people who invest on our platform.” He also credits the School for giving him the knowledge and confidence to move beyond his background in technology into the field of alternative finance, although he’d actually gained experience of finance during spells at HSBC and First Direct.
Mitra and CrowdBnk are now at the heart of a booming industry. The UK’s alternative finance sector has grown from £267 million in 2012 to £1.74 billion in 2014, according to a report by the UK-based innovation charity Nesta. But beyond the fanfares, Mitra thinks the next five years will be crucial for the industry. Its fate, he says, will depend on the returns people get from their investments.