Alumni Innovation Telecommunications, Media and Technology
Save to my profile

It’s not uncommon to see London Business School (LBS) connections peppered through businesses. But at Infinitesima, the nanotech company bringing revolutionary developments to the semiconductor industry, the connections are marked Over the course of 14 years, a number of LBS alumni have significantly deeply connected to Infinitesima, the UK Oxford-based company that is bringing 3D high-speed nanoscale imaging to market.

Take a moment to imagine the scale of your mobile phone chip. In an ever-shrinking world the ability to provide reliable and accurate measurement technology at a sub-nanometre scale is crucial. Infinitesima’s ground-breaking Rapid Probe Microscope (RPM) which has been integrated in Zeiss’ new photomask repair tool has thus become a key enabler in the manufacture of semiconductor chips.

But no matter how smart technology is, without well-matched talent and the right backing, it often stays locked in a lab. Superficially, Infinitesima represents the typical state of the art advances behind the latest gadget, but behind the scenes there is also an LBS cohort bringing the technology to market.

“I think technology on its own is completely meaningless,” says CTO and inventor Dr Andrew Humhpris. “Without people with the right commercial skills to take it to the marketplace, it won’t go anywhere.” And commercial acumen is exactly what the LBS executive team, board members and investors bring to Dr Humhpris’s pioneering technology.

CEO, Dr Paul May SLN1998, who took over from LBS alumnus Jeff Lyons SLN2001 in December 2014, says: “It’s not as simple as having technical and commercial expertise, it’s also about experience.”

“Our time at LBS helped us re-enter the world of business, improved. After that it’s about learning the hard way – layering knowledge on top. When you learn from your mistakes it’s only then that you understand what might or might not work in the real-world.

“It’s the combination of theory and practice that allows you to take technology and to commercialise it.”


For Zeiss, the German manufacturer and world leader of medical/optical systems and industrial devices, to select Infinitesima – a company based outside of Silicon Valley – has been a true mark of authority.

“It’s been great for our credibility to get into what is an extremely difficult supply chain and receive certification for the tools to enter the mask manufacturing market,” says Dr May.

To understand the impact requires an understanding of the product. How do photomasks fit into chip-making processes? The technology is changing to create ever smaller features in high performance chips. Photolithography is the process by which the layout of thecircuits are replicated on each layer of the chip.

Taking traditional photography as an analogy, the image on the film negative is transferred onto light sensitive paper by shining light through the negative onto a projector. In chip-making, a similar process is used – but instead of negatives, it’s a photomask, and instead of a projector, there’s an enormously complex machine called a photo lithography stepper.

Chips are made on silicon wafers, which can be likened to a whiteboard if you were to project an image on the wall. The mask is placed in the stepper and the light shines through it to create an image on the wafer. In the real world, the scanner makes hundreds of exposures: printing the same pattern on every chip across the wafer. The quality of the mask and the wafer is critical to the success of the whole chip-making process. They must be completely defect free, otherwise any imperfection will be fatally reproduced on every single chip.

Dr May, who comes from a technical background but honed his leadership skills on the Sloan programme at LBS, says: “In the semiconductor market you need a tool that can make nanoscale measurements quickly enough so as not to slow down the throughput of wafers. Our competitors in probe microscopy have much slower imaging speeds.”

“It’s not about a hero experiment in the lab. To create a technology that’s manufacturable and repeatable is challenging – but we’ve achieved it.”

So the company’s key market differentiator is speed. But that’s not all. The semiconductor market is worth hundreds of millions of pounds, and the Infinitesima team showcase something more significant than technology: dedication. Imagine how much the industry has changed since 2001, the year inventor Dr Humhpris launched the business with Jamie Hobbs, co-founder; Robin Tombs, board member; and Andrew Dixon JEMBA2009, Chairman at Infinitesima. The world has changed in 14 years: Nokia and Blackberry phones have risen and fallen and Apple’s iPhone has appeared.

Dr Humhpris says: “When we started we had a piece of the solution for the semiconductor industry, but we didn’t have all the pieces. What we’ve been busy doing over the years is putting those other pieces into place and creating technology to support high-speed imaging, which is our core technology.”

What, or who, you know 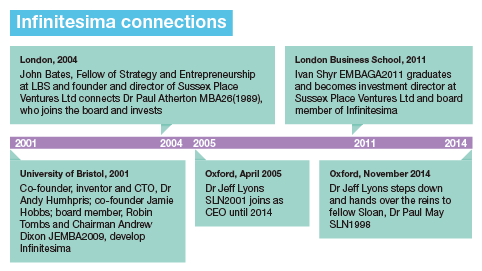 Dr Humhpris’s background was looking at biological samples, “Soft squishy things”, he says. Now, under the guidance of commercial experts, he’s the inspiration behind a start of the art tool focussed on the very different semiconductor market. Dr Humhpris has provided the ideas, but it’s the executive team steeped in LBS talent that helped make the move from concept to viable product.

Dixon, Chairman and investor, explains: “Robin [board member of Infinitesima] and I worked on other businesses together in 2001. Robin and Andy [CTO, co-founder and inventor] had the technology, but didn’t have the experience in the industry that we needed.”

It was at that point that Dixon discovered investor, and board member, Dr Paul Atherton MBA26(1989), who had the commercial and investment expertise to help develop the business. Dixon says: “I met John Bates [Fellow of Strategy and Entrepreneurship, at LBS] at an event. He said, ‘You’ve got to talk to Paul Atherton’.” In 2004, Bates introduced Dixon and Dr Atherton, who today is a board member of the business.
Investment expert Dr Atherton emphasises the importance of strong leadership, particularly in tech-based businesses. “Often,” he says, “When you find a piece of technology, your next task is to build a management team. And together, with the help of the LBS network, the founding team did just that

“The School network is valuable. I think of networks as hubs. People like John Bates have many connections. It’s like being three steps away from everyone you need to know, on the planet.” Bates is also the founder and a director of Sussex Place Ventures, the School’s in-house venture capital fund manager, which has been integral to helping Infinitesima hit key business milestones. In fact today, Ivan Shyr EMBAGA2011, investment director at Sussex Place Ventures, represents the fund on Infinitesima’s board. Shyr says: “I may not have known the other board members, but I didn’t feel like I was walking into a room where there were complete strangers. Trust is built over time, but I felt an element of trust as soon as I walked through the door.”

Dixon explains why trust is so imperative to a business that’s built on layers of credibility. “I like working through the LBS network. We do not want our common reputation to be impacted by any inappropriate behaviour. If the team was made up of complete strangers, there’d be less trust. Because of that and our reputation, there’s a lot more respect, I think.”

Dr May adds: “I think the ethics of business, including team dynamics, was always emphasised very strongly at LBS, which translates to the way we operate.

“The business plays a key role right at the top of the pyramid of a really sophisticated industry. Semiconductor manufacturing is an incredible market. The fact that we’re involved right at the beginning of the process is something that gives everyone in the team a buzz.”

Coupled with passion for the industry, the team members are proud of their strengths. Dixon says: “I’m proudest of the fact this is a very difficult industry to operate in: technology evolves, certifications are required and clients are very particular, but our 14-year-old business has not only kept together a good team, but also a strong team.

“Andy [inventor and CTO] should be immensely proud of the work of his technical team, but I think our greatest days are ahead of us.”

So while the Zeiss deal has been a great achievement so far, the best for Infinitesima is yet to come. Watch this nano space.